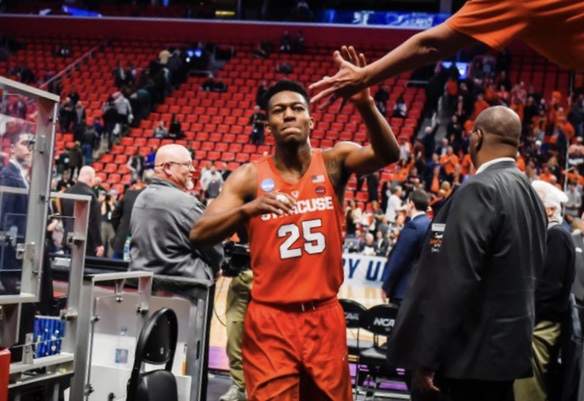 The Orange once again found themselves right on the bubble on Selection Sunday but they, fortunately, were the last team to make it into the field of 68. The Orange took advantage of that by putting on a defensive clinic, which helped them win three games in the NCAA Tournament and make it to the Sweet 16. The Orange then were able to return all their role players from that team that made it to the Sweet 16, while they do add a couple of players to help the Orange out from a depth perspective. Look for the Orange to once again be one of the top defensive teams in the nation this season, while it is almost certain that the Orange will improve on the offensive end as they will have players that they are able to sub in when players get tired this season.

The Orange return the trio of Tyus Battle, Oshae Brissett and Frank Howard who both should be able to run the point guard position, while the addition of Jalen Carey and Buddy Boeheim will be critical for the Orange. Tyus Battle is regarded as the teams best player, he is an elite level scorer, he is their best offensive player and he will continue to lead the team in scoring. Frank Howard plays the point guard position alongside Battle, Howard is the teams best passer and he too can hit shots from everywhere on the court. Oshae Brissett too can knock down shots from everywhere on the court, while he is a good rebounder, and he could play as a small-ball four at times for the Orange. All three of these players are great defenders and play well within the 2-3 zone, which makes them such a tough team to play against. The thing that killed the Orange last year was that they had no depth at the guard position, so the Orange had an offense that ran the shot clock down before taking a shot that way players could somewhat rest while on offense. That will change this year as they bring in both Jalen Carey and Buddy Boeheim who both should help provide some depth, while they will indirectly help the Syracuse offense out. Carey is a combo guard, who can handle the point guard position, he is quick and has the ability to shoot the ball at a high level. Buddy Boeheim is mostly known for being Jim Boeheim’s son, however, he is a good three-point shooter, and he will get minutes this season because of the fact he is the coaches son.

The Orange don’t really have any great players up front but what they do are players that can play a role that is needed for the Orange in order to be a successful team. Marek Dolezaj is the ultimate glue guy, as he hustles for loose balls, get rebounds, block shots and he is a great defender, all things that are helpful for the Orange. Pashal Chukwu is a 7’2” player who anchors the Orange on the defensive end, while he isn’t a great player on offense, he is a great rim protector and a good rebounder. Bourama Sidibe is a great rim protector as well, he should be a good backup for Chukwu, while being an occasional scorer from inside. Elijah Hughes should bring some bench depth, he’s both a good shooter and good passer, which can help out the Orange on offense. While this team isn’t great up front on offense, their length and defensive ability in their 2-3 zone will make them a tough team to play against.

The Orange have put together a non-conference schedule that does give them a couple of tests but it won’t overwhelm them before ACC play. The Orange start the game with a couple of home games, before they play in the 2K Classic, a field that will give them a game against Uconn and either Iowa or Oregon. The Orange will play at Ohio State in the ACC/ Big Ten Challenge on November 28th, which will give them an opportunity for a Quadrant one win. The Orange will finish non-conference play with seven straight home games, only a December 8th matchup against Georgetown will be against a Power-6 team. The Orange begin ACC play on January 5th playing at Notre Dame, they will play an 18-game ACC schedule that concludes on March 9th when they will play at Clemson. The ACC Tournament runs March 12th-16th, with the NCAA Tournament beginning on March 19th.

The Orange look to give people fits this season by playing in their 2-3 zone, however, the key will be their offense. If they can play more efficiently on the offensive end, this team has the potential to be a great team that could contend for an ACC title, if not they will just be another solid ACC team. The Orange could face some struggles early on as they will play a tough Oregon team and they will play Ohio State on the road but after that, they should roll. Look for this team to come into ACC play potentially unbeaten, which would put a target on their back. ACC play will be filled with up and downs but they should manage to go around 12-6 in ACC play which will get them a high seed in the NCAA Tournament. In the Tournament, they will continue to be a matchup nightmare as most teams won’t be able to prepare for their tough 2-3 zone. Their tough 2-3 zone mixed with what looks to be better offense could potentially help them win a few games in the NCAA Tournament and get them into the Final Four once again.