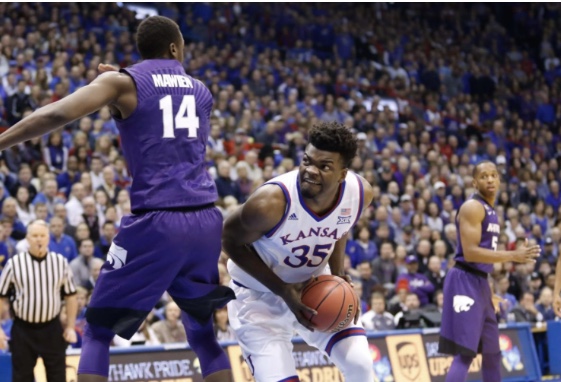 The Big 12 once again is the deepest leagues top to bottom in the sport, as all 10 teams are very good. While all 10 are very good the league definitely has some tiers to it, starting with Kansas at the top, Kansas State in second, and then five teams that include Texas, West Virginia, TCU, Texas Tech, and Iowa State. The conference then will be rounded out by Baylor, Oklahoma, and Oklahoma State. I think seven teams from the Big 12 will make the NCAA Tournament, while I think the other three teams will tail off in conference play.

Power Rankings along with Team Breakdowns

As usual the Jayhawks come into the season as the preseason favorite to win the Big 12 and why wouldn’t they be with this team they have this season. They have some solid returning players like Lagerald Vick and Udoka Azubuike, mixed with a great recruiting class, headlined by Quentin Grimes and Devon Dotson and three elite-level transfers, including potential Big 12 POY Dedric Lawson. This has many saying that this could be Bill Self’s best team at Kansas. They should go around 15-3 or 16-2 in the Big 12, win the league for a record 15th consecutive season, and be in the mix to win a National Championship.

The Wildcats had one of their best seasons under Bruce Weber by advancing to the Elite Eight, the most impressive thing about that run though is they did it without Dean Wade. This season the Wildcats return nearly everyone from last years team, headlined by Dean Wade, Barry Brown, Kamau Stokes and Xavier Sneed. The Wildcats should go around 13-5 or 14-4 in the Big 12 and earn a high seed in the NCAA Tournament, from there they could make it back to the elite eight and maybe take it one step further by advancing to the Final Four.

Texas has a lot of their team back from last season, while adding a good recruiting class, and Andrew Jones, who missed most of last season with Leukemia. Dylan Osetkowski and Kerwin Roach should continue to be good leaders for Texas, while Courtney Ramey, Matt Coleman and Jericho Sims should step up for Texas. I look for Texas to be in that 3-7 range in the Big 12 throughout the season but I do think they will come out in third in the conference by going 11-7 in Big 12 play, from there they could make a deep run in the NCAA Tournament although it wouldn’t be expected.

The West Virginia Mountaineers lost two great guards in Daxter Miles Jr. and Jevon Carter but they still have some good pieces leftover from last years team. Sagaba Konate, James Bolden, Lamont West, and Esa Ahmad all should take steps forward, allowing West Virginia to stay near the top of the Big 12. I look for West Virginia to be in that 3-7 range of the Big 12 but I think they should be able to scratch out an 11-7 or 10-8 record in conference play.

The Red Raiders once again have thrown together another roster that has good talented young players, along with good experienced pieces. Jarrett Culver should be the teams best player, while players like Matt Mooney, Brandone Francis, Tariq Owens, Norense Odiase, and Khavon Moore all should be key contributors for the Red Raiders. I think the Red Raiders could potentially finish third in the Big 12 if things break right this season, although a 9-9 finish in the Big 12 is probably the most likely outcome for Texas Tech.

The Cyclones come into the season with a lot more hype surrounding them this year, in part because of the talent the Cyclones have on their team. Lindell Wiggington is the headliner for the Cyclones but Nick Weiler-Babb, Marial Shayok, Talen Horton-Tucker, and Cam Lard should all be good players around Wiggington. Iowa State always does well at home, so I’d imagine they will have a good conference record because of that, I think an 8-10 finish in the Big 12 is very likely, that record would likely send them to the NCAA Tournament.

Baylor has completely revamped their roster, by adding multiple transfers and Freshmen to help the Bears compete in the Big 12. King McClure, Tristian Clark, and Makai Mason are expected to be the best players for the Bears this season, while the Bears should see a couple of other players emerge as key contributors. I think the Bears will win games in Big 12 play but not on a consistent enough basis, which will probably lead to a 6-12 finish in the Big 12 and another missed NCAA Tournament for the Bears.

Oklahoma lost a lot from last years team, headlined by guard Trae Young, making this seem like another rebuilding year for Lon Kruger and the Oklahoma Sooners. The Sooners have a decent core of returning players from last years team, with Brady Manek, Christian James, Kristian Doolittle all returning, the key will be at the point guard position where Aaron Calixte will be relied upon heavily this season. The Sooners definitely have the pieces win games in the Big 12 but they should struggle, I think they will likely wind up going 5-13 in Big 12 play and finish at the bottom of the conference.

The Cowboys have a good young head coach and look like they are going to be heading in a good direction as a program but this year will not be a good one for the Cowboys. The Cowboys return only two rotation players from last year Cam McGriff and Lindy Waters, while they do add a good transfer in Michael Weathers, as well as a decent recruiting class. The Cowboys will likely struggle to a 2-16 or 3-15 finish in the Big 12 this season, while good years are ahead they just aren’t talented or experienced enough to compete in the tough Big 12.