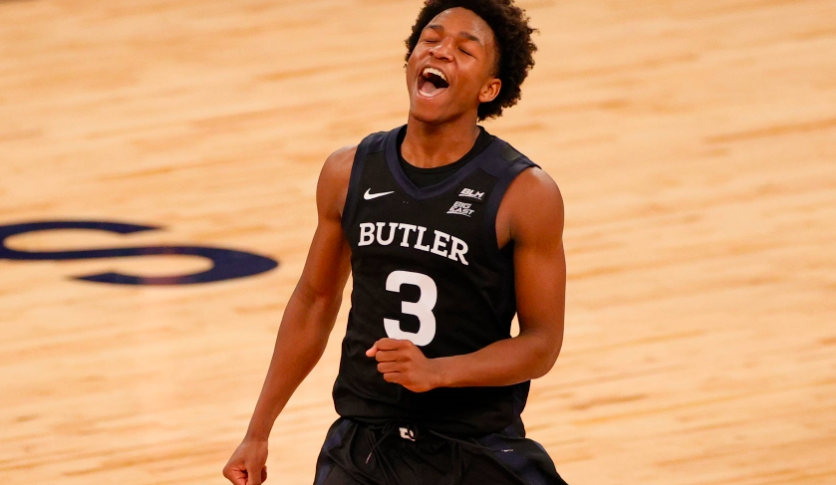 A season ago, Shereef Mitchell carved out a role as a defensive specialist but with so many players gone from last year’s team, Mitchell now takes hold as the main option at the guard spot. Mitchell will continue to be a good defensive guard, but offensively is where he’ll take off, he’s a solid shooter, passer, and scorer, who gets the opportunity to play a bigger role. Don’t expect him to necessarily average 15 per game, but he should take a massive increase in production offensively.

Dan Hurley has brought Uconn back to the NCAA Tournament, but with James Bouknight off to the NBA, the Huskies need a new go-to option offensively, one of those options could be big man Adama Sanogo. Sanogo was inconsistent as a freshman but had his best games later in the season as UConn was rallying. Sanogo is a good interior scorer with solid post moves, and high-energy rebounding, making him a good player to have on the court, while a development offensively will make him a potential All-League player.

Providence lost do-it-all guard David Duke Jr, which of course makes way for potential breakout candidates, including with the potential for Alyn Breed to be a main option for the Friars. Breed is a solid guard that’s good but not great at everything, he’s a solid defender, shooter, who plays primarily off the ball. Breed should become the third option for the Friars, and with the development of an outside shot, he could be the piece that helps send Providence back to the NCAA Tournament.

While Xavier is a team that is primarily running it back from a season ago, Dwon Odom strikes me as a player that could see an increased role this season. Odom is a 6’1 true point guard that is a good passer and a developing scorer. Odom should now move into being a full-time starter, and if he can improve as a shooter, he’ll have an opportunity to be the third option for a Xavier team that should be in the NCAA Tournament.

After starting and being a meaningful contributor for Georgetown a season ago, Harris now becomes the go-to option for Georgetown. Harris is a good ball-handler, passer, scorer, and while he wasn’t efficient, he showed an ability to be a three-point threat. Harris will continue to run the show at the point and he could be a 15 point per game scorer as well.

While Marquette is a team that cannot be trusted, Justin Lewis is a player that should be trusted as a breakout option as he steps in as the primary option at the 4. Lewis is a solid scorer, capable shooter, and really good rebounder, who was good as a freshman playing in a bench role. Now with more opportunities offensively, Lewis will be relied upon more as a scorer, and he should become a double-digit per game scorer.

While some traditional breakout lists would exclude Chuck Harris because he was too good a year ago, Harris is poised for a breakout into being a First Team All-League type player. Harris is a dynamic guard who will play off the ball, he’s a great shooter and scorer, who really emerged as a big-time scorer late in the season. Look for Harris to become one of the top scorers in the Big East while helping Butler contend for an NCAA Tournament appearance.