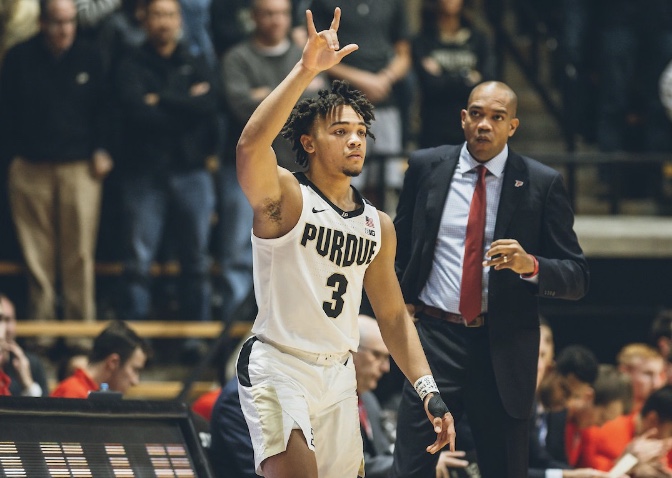 My preseason Player of the year Carsen Edwards has been nothing short of fantastic thus far this year, he is averaging 25.3 points per game and 4.2 assists per game thus far this year. His leadership and talent have led the Boilermakers to a 5-1 start and a ranking of 19 in the AP Poll. He will likely need to continue to play this well, while Purdue will have to remain ranked if he is going to win the National Player of the year, however, if the season ended today he would be the easy choice to win the award.

Grant Williams won the SEC Player of the year award last year, yet he now has gotten even better this year. Williams is averaging 21.6 points and 8.4 rebounds per game, which is very impressive. Williams is an efficient scorer, scoring on the inside and occasionally knocking down shots from deep. Williams also has shown the ability to get his teammates involved, as he is averaging 4.2 assists per game thus far. All these attributes, along with his improvement in his game makes him a legitimate National Player of the year candidate.

After struggling last year, Wisconsin is back in the mix as a Top-25 team and they are a legitimate Big Ten contender and this has a lot to do with the play of Ethan Happ. Happ is averaging 18 points and 12 rebounds per game, which is impressive itself, then add in the fact he’s averaging 5.3 assists per game. This Wisconsin team plays with four good shooters and Happ, which leads to decisions for opponents on defense. You can either double Happ and you give up an open three because Happ can find the open man or you can leave him one on one and let him stuff the stat sheet, either way, it will likely lead to points for Wisconsin.

Following Gonzaga’s win over Duke, Rui Hachimura called himself the best player in the country, while he’s not number one on my player of the year rankings, he’s been great this year. Hachimura is averaging 21.9 points per game, while he is shooting 60 percent from the field. Hachimura is a great interior scorer, however, his midrange game is spectacular, while he now shoots threes. This offensive game makes him an impossible guard for opposing defenses.

Most people thought De’Andre Hunter would make a sophomore jump, however, I’m not sure many thought he would be this good. Hunter is averaging 16.8 points and 6.3 rebounds per game, which may not seem like a lot but it actually is because of the slow pace Virginia plays at. Hunter also has been great on defense, as he can guard all five positions effectively. All these attributes make him a legitimate All-American candidate, while it helps the Cavaliers to be as good as they are.

Arizona State has once again gotten off to a hot start to the season and this is in large part due to the play of freshman star Luguentz Dort. Dort is averaging 23 points per game, which is the most points per game of any freshman. Dort is also pulling down 7.8 rebounds per game, which is impressive given that he plays a lot as a two guard. Without Dort this Arizona State team would probably be an afterthought in the Pac-12, however, with him in the lineup the Sun Devils are rightfully a Top-25 team and at this point in the season maybe the favorites to win the Pac-12.

Nevada is ranked in the Top-5 for the first time in program history and a lot of that has to do with the play of both Martin twins, although more specifically Caleb. Caleb Martin is averaging 21 points per game, which is impressive. While he hasn’t been the most efficient shooter, he still is knocking down 38 percent from behind the arc, which is where the majority of his shots come from. His length, combined with his ball-handling ability is what makes him great, alongside his great shot-making ability. He should repeat at Mountain West Player of the year and will push for an All-American team, while Nevada should be ranked in the Top-10 all season long.

RJ Barrett is the Blue Devils leading scorer, while many would argue he is their best player (although I would argue Zion Williamson is). Barrett is a prolific scorer while being a good ball-handler and a good rebounder, all of which has been on display this season. Barrett has been heavily criticized for being inefficient, for good reason as he is only shooting 42 percent from the field and 33 percent from three. One notable stat is that going into last nights game he missed one less shot than Zion Williamson has taken on the season. His inefficiency could be improved but he’s still a good player who will be an All-American candidate.

Texas is looking great this year and a big reason why is the great play of Kerwin Roach. Roach is averaging 18.6 points and 4.6 assists per game, which are pretty good statistics. The key for him though has been stepping up when it’s needed most, he hit a game-tying shot against Arkansas in a win, while he dropped 32 points against North Carolina in a shocking win over the Tar Heels. His ability to step up big for his team is one of the main reasons the Longhorns are a Top-20 team in the sport, while they look to be a contender for a second place finish in the Big 12.