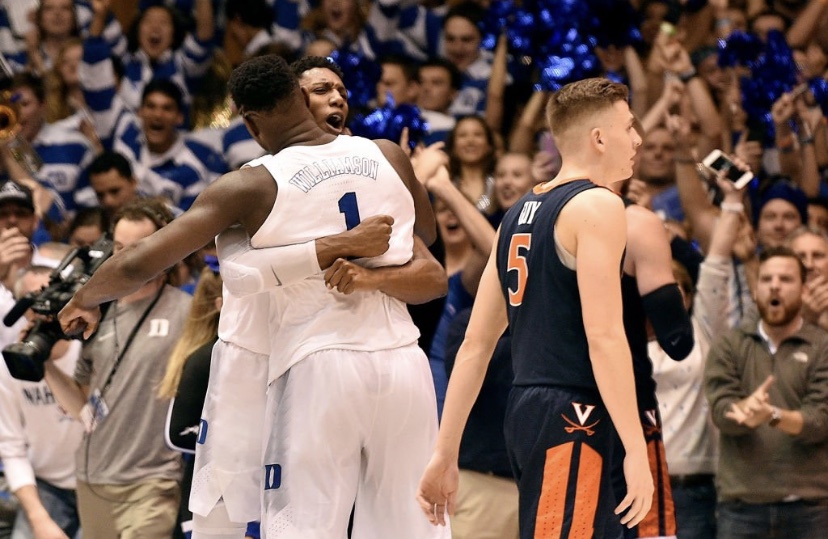 Power Rankings for each Major Conference

We are a little under one month into conference play and conference races are starting to shape up, so what I decided to do is make Power Rankings for each of the six Power Conferences. This is going to have some recency bias into account as teams who play well of late will be rewarded more than teams not playing well.

1.Duke: The Blue Devils moved atop the ACC after a win over Virginia, Zion Williamson is probably the National Player of the year right now, while RJ Barrett is really good as well.

2.Virginia: The Cavaliers might not have won at Duke but they still have rolled through the rest of the ACC, which is impressive.

3.North Carolina: The Tar Heels appear to be rounding into form right now as they have won seven of their last eight games and they look like a potential contender to win the ACC.

4.Louisville: The Cardinals are really good and they have outperformed preseason expectations but I don’t think they are a legitimate challenger atop the ACC standings.

5.Syracuse: The Orange are rounding into form right now, they have won now six of their last seven games, which includes an impressive win at Duke.

6.Virginia Tech: The Hokies are good but in their two losses in ACC play they lost by over 20 each, while they also don’t have a deep bench.

8.NC State: The Wolf Pack are 3-2 in ACC play but they do have a loss to Wake Forest, which isn’t ideal.

9.Clemson: The Tigers have played a tough ACC schedule but starting 1-4 is putting them in a hole.

10.Pittsburgh: The Panthers have won two ACC games against Florida State and Louisville, this team looks like they will avoid the cellar of the ACC this year.

11.Georgia Tech: The Yellow Jackets are a really solid team, they may not be an NCAA Tournament contender but they are looking decent in ACC play.

12.Boston College: This team isn’t exactly great but they do have the talent to pick off a couple of teams.

13.Notre Dame: The Irish are in a pretty clear rebuild but they still could pick a couple of teams off.

14.Miami: The Hurricanes have a good core but the fact they only play seven players does hurt them.

15.Wake Forest: The Demon Deacons aren’t good but they did beat NC State, meaning they won’t go 0-18 in conference play.

1.Villanova: The Wildcats are now 6-0 in Big East play, the senior duo of Phil Booth and Eric Paschall are playing great.

2.Marquette: The Golden Eagles lost their first game in conference play but have since won five straight and they look like a legitimate Big East title contender.

3.St. John’s: The Red Storm have tailed off in Big East play but they still are probably the third best team in this conference.

4.Seton Hall: The Pirates would be in good shape to compete near the top of the Big East standings but they lost to DePaul twice.

5.Butler: The Bulldogs have been decent in conference play if they can get on a winning streak they have a chance to make the NCAA Tournament.

6.Creighton: The Blue Jays have played a tough Big East schedule but they have played beaten who they are supposed to.

7.Xavier: The Musketeers have been better as of late but I don’t think they are really good.

8.DePaul: The Blue Demons are winning games in Big East play and are looking like a team that could make the NIT.

9.Georgetown: This team is probably a year away from making a run at the NCAA Tournament.

10.Providence: Someone has to be last in this conference, I don’t think they are bad but they are currently in last place in the Big East.

1.Michigan State: The Spartans may not have the most talent on the court but they are continuing to blow teams out.

2.Michigan: The Wolverines are no longer unbeaten but they still are a team that might win the Big Ten and could challenge for a National Championship.

3.Maryland: Bruno Fernando and Anthony Cowan have been great as of late, which is helped lead them to a 7-2 record in Big Ten play.

4.Purdue: Some fell off the Boilermakers bandwagon early but they have rebounded and they are now looking like a legitimate Top-25 team.

5.Wisconsin: The Badgers lost four of five before they beat Michigan on Saturday, this team should get rolling now that they play an easier schedule.

6.Iowa: The Hawkeyes have won five straight but now we will see how good they are as they will play a tough next four games.

7.Nebraska: The Cornhuskers have been up and down in Big Ten play, which isn’t exactly ideal.

8.Minnesota: The Gophers have been up and down, winning at Wisconsin, while also losing at Illinois.

9.Ohio State: The Buckeyes have not won a conference game since December 5th, things could get worse before they get better as they are probably underdogs in their next three games.

10.Indiana: The Hoosiers have lost five straight games and now they are looking like a potential bubble team.

11.Northwestern: The Wildcats are winning the games they are supposed to if they can start winning games against better opponents they could move towards another NCAA Tournament birth.

12.Rutgers: The Scarlet Knights have won games against Ohio State and Nebraska, which is pretty good for Rutgers.

13.Illinois: The Illini might not be great but they are getting better as the season goes along.

1.Kansas: The Jayhawks are slowly coming together, as they try to readjust their scheme and develop their young guys at the same time.

2.Kansas State: The Wildcats have now won five straight games after losing their first two Big 12 games and looking bad in those games.

3.Iowa State: The Cyclones are the best team on offense in this conference and they still could challenge for the Big 12 title.

4.Texas Tech: The Red Raiders have now lost three straight games, the real issue for the Red Raiders that I think keeps them from winning the Big 12 title is that Jarrett Culver is their only true offensive weapon.

5.Baylor: The Bears are not the most talented team in the world but they do play well together and are now in the driver’s seat for an at-large bid.

6.Oklahoma: The Sooners are starting to come back down to earth a little bit but they still did enough early on that they should still make the NCAA Tournament.

7.TCU: The Horned Frogs have lost a lot of key pieces but I still think this team is good enough to win on any given night in the Big 12.

8.Texas: The Longhorns aren’t the stereotypical third to last team in the Big 12 as they can win on any given night, they just have to shoot it well to win games.

9.Oklahoma State: The Cowboys are clearly one of the two worst teams in this conference, I have them ahead of West Virginia just because they did beat the Mountaineers in Morgantown.

10.West Virginia: This season has been a complete disaster but on the bright side, Bob Huggins does get a bonus for beating Kansas.

1.Washington: The Huskies are probably the best team in the PAC-12, they aren’t a great team but they win games, which is good.

2.Arizona State: The Sun Devils swept the Oregon schools this past week and now are back in position to make the NCAA Tournament.

3.Arizona: The Wildcats are young and aren’t the most talented team, so losses at home against Oregon can happen.

4.Oregon State: The Beavers couldn’t put themselves in the driver’s seat for the PAC-12 title by beating either of the Arizona schools, that being said they still are probably the fourth best team in this conference.

5.Oregon: The Ducks showed us something in their win at Arizona, maybe we shouldn’t write them off just yet.

6.USC: The Trojans have beat both Stanford and UCLA, so they get positioned ahead of those two schools.

7.UCLA: After a strong start in the post-Steve Alford era, this team is playing bad again.

8.Stanford: Stanford has a potential lottery pick in KZ Okpala, that might be a reason to watch this team.

9.Utah: The Utes are 3-2 in conference play, if they keep this up they could challenge for a bye in the PAC-12 Tournament.

10.Colorado: The Buffaloes beat Washington State, so they have to be ahead of them.

11.Washington State: The Cougars have beat California, so they must be ranked ahead of them.

1.Tennessee: The Volunteers are 16-1 on the season and they are ranked number one in the AP Poll, things are going well for this program.

2.Kentucky: This team has been playing some of their best basketball as of late and they now look like the could challenge Tennessee for the SEC title.

3.LSU: The Tigers weren’t great in non-conference play but if we are talking about SEC play, you could argue the Tigers are the best team in this conference.

4.Alabama: The Crimson Tide have lost to Texas A&M but other than that game, they have pretty clearly looked like the fourth best team in this conference.

5.Ole Miss: The Rebels may be coming back down to earth but their start to the season has them well positioned to make the NCAA Tournament.

6.Auburn: The Tigers have yet to pick up a quality win, this team needs to start winning games against good teams if they want to salvage a decent seed in the NCAA Tournament.

7.Mississippi State: The Bulldogs haven’t played great in SEC play but I still do think they are good enough to still make the NCAA Tournament.

8.South Carolina: This team was 5-7 in non-conference play, now they are 5-1 in SEC play and 10-8 overall, not sure how this happened but good for the Gamecocks for not giving up early.

9.Florida: The Gators have really just beat the teams they are supposed to, while not beating anyone ahead of them in these Power Rankings.

10.Georgia: The Bulldogs have at least looked competitive in some of their SEC games.

11.Arkansas: They have a road win at Texas A&M, that’s worth something.

12.Missouri: The Tigers are doing what you would expect without Jontay Porter.

13.Vanderbilt: The Commodores have been competitive in most of their games.

14.Texas A&M: The Aggies have a win at Alabama, other than that this team isn’t good.

2 thoughts on “Power Rankings for each Major Conference”