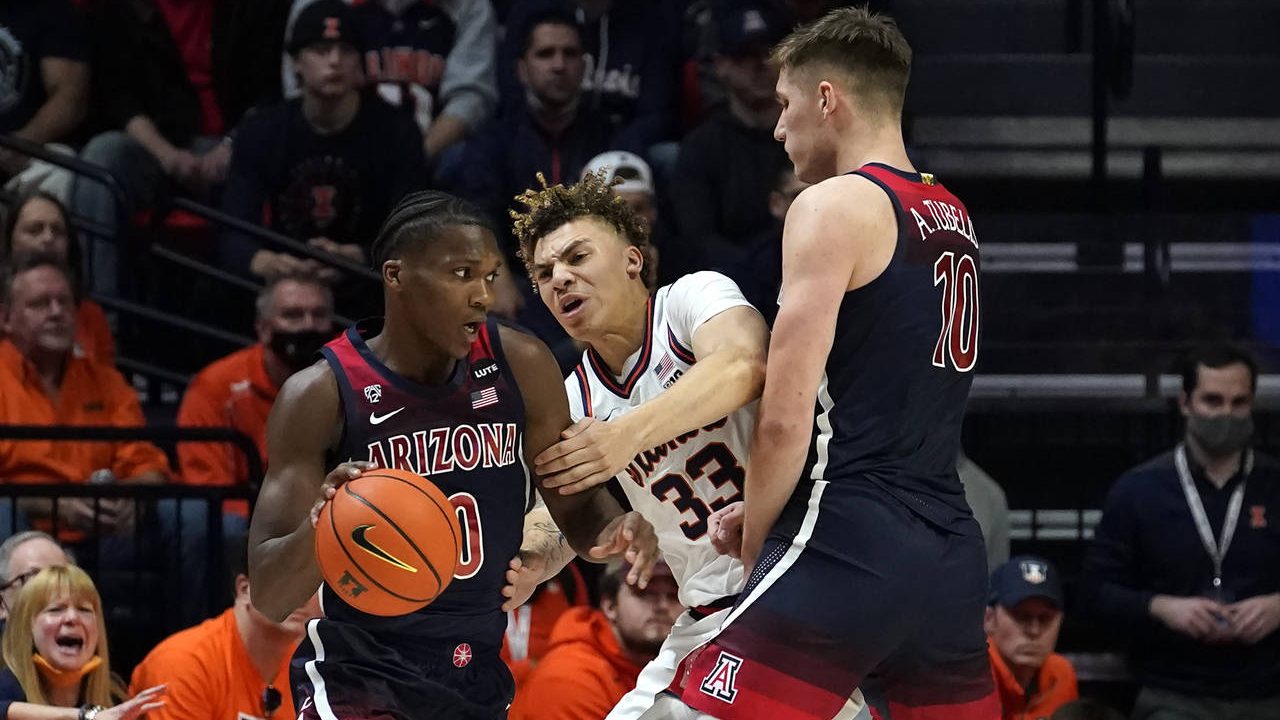 The NCAA Tournament picks back up with what should be a great second weekend and some worthy Final Four teams along the way. The Sweet 16 will have some great matchups, volatility and that’s what makes this sport great, so let’s dive into the matchups.

The first game of the Sweet 16 gives us the number one overall seed in the Gonzaga Bulldogs, against the SEC’s last team remaining, the Arkansas Razorbacks.

Arkansas has yet to play their best basketball along the way, they’ve struggled with both Vermont and New Mexico State but are back in the Sweet 16. JD Notae is a star and he’s been the key for the Razorbacks getting to this point, add to him good contributors in Stanley Umude, Au’Diese Toney, and Devo Davis who can step up, then of course a great modern-day big man in Jaylin Williams, who is a versatile defender and decent scorer. The Razorbacks will need to be firing on all cylinders to have a chance but we’ve seen Notae play great and the role players are starting to take a step forward, so this game won’t get out of hand.

Gonzaga is in their seventh straight Sweet 16 but it wasn’t easy as they struggled against Memphis, but found a way to win. Drew Timme is the face of the team, he’s as good of an interior scorer as there is in the sport and he carried them against Memphis. Andrew Nembhard had really stepped into being a go-to scorer late in games and is a great ball-handler, and they also have the likely #1 pick in Chet Holmgren, who while skinny, is a great shot-blocker, shooter, and has incredible ball-handling skills. The Bulldogs can be game-planned against but that game plan involves forcing their guards to make open shots, which they are more than capable of doing.

Look for Bulldogs to go inside early and often with Timme and either force foul trouble or use that as a way to kick it out for open shooters. I do Think Arkansas does hang around in this game but at the end of the day, the Bulldogs will pull away and win somewhat comfortably.

A rematch of the 2018 National Championship will take place in San Antonio as the Michigan Wolverines will hope to exact some revenge against the Villanova Wildcats.

The Wolverines have struggled this season but are starting to peak at the right time. Hunter Dickinson is a matchup nightmare for Villanova because of his size, scoring ability, and ability to pass the ball. Add in improved guard play from DaVante Jones and Eli Brooks, and peaking freshmen Caleb Houstan, Moussa Diabate, and Frankie Collins and this team is peaking at the right time. The key comes down to whether Michigan can get stops of course but they have the offensive capabilities to give Villanova issues.

Villanova is as experienced as it gets, led by Collin Gillespie this team is poised to make another Final Four run. Gillespie is a great leader, shooter, facilitator, and leader, who will be reliable to score. Jermaine Samuels and Justin Moore are pretty good secondary options, while they’ve gotten good play from Eric Dixon and Brandon Slater. The talent isn’t great but the coaching, program experience, and toughness to be a tough out in March.

This will be a game where I think Michigan has a major matchup advantage against Villanova, as Dixon will be overmatched by Dickinson. That said, I still trust the experience of Gillespie, Moore, and Samuels to help lift Villanova to a win late in this game.

The matchup of the Sweet 16 will be right here as the defensive-minded Texas Tech Red Raiders will play Coach K’s Blue Devils, in what could be Coach K’s last game.

The Red Raiders have the top defense in the sport and that is why they are in this game, to begin with as they were poor offensively against Notre Dame. Bryson Williams is the clear best offensive option on the Red Raiders, but Kevin Obanor, Kevin McCullar, and Terrence Shannon are all options capable of scoring 20 for Texas Tech to help them win. While the Red Raiders offense is the only thing keeping them from pulling off the upset, the no-middle defense will give a young Duke team issues and keep them in the game no matter what.

Duke is as talented as any team in the sport, they have a legitimate star in Paolo Banchero, who is excellent at the 4 and could be a great matchup against the no-middle, as he’s a great passer and scorer. Mark Williams will be an issue for Texas Tech as well as he’s 5 inches taller than most of the Red Raiders’ front line, while the Blue Devils have good size and scoring at the guard spot.

This is a game where the sole determination comes down to which team’s weakness can be most effective, Duke is poor defensively and rebounding, Texas Tech is poor offensively, so whichever team can win against their weakness will win. I haven’t been totally sold on the Blue Devils’ ability to defend, and thus I am rolling the Red Raiders getting hot from the perimeter and pulling off the upset, that said, this is the least confident I am on any of these Sweet 16 games.

The late game in San Antonio will see the gritty, tough Houston Cougars, fresh off their first win against a protected seed since 1984, going up against the South Regional favorite Arizona Wildcats, who play a run and gun flashy style of play.

The Cougars play a gritty tough style of play, which is why they are tough to go against, especially on short prep time, as Illinois found out. The Cougars lost 2 of their Top-4 players in Sasser and Mark, but have not skipped a beat, Kyler Edwards and Jamal Shead have stepped up in the backcourt, while Josh Carlton and Fabian White continue to hammer the offensive glass and defend tough inside. I will give them major credit for beating Illinois, they deserve that much. That said, this Arizona team will be another level of basketball team, so it will be interesting to see how this style of play goes against a legitimate title contender.

Arizona narrowly escaped TCU in the Round of 32, they played subpar defensively, got beat up by Eddie Lampkin, and probably should’ve had a foul called against them that would’ve sent Mike Miles to the line with 3 seconds left. That said, surviving and advancing when you don’t play great is always big and the Wildcats did just that. Bennedict Mathurin is a star, he hit the biggest shot in the TCU game and is a terrific player because of his size and scoring ability. Christian Koloko is a great shot-blocker and improved scorer inside, who can defend 1-5, while they have versatility, scoring, and size on the rest of the lineup that makes opponents jealous.

This game will be a game dictated by tempo and clutch shot-making, the Cougars’ game plan to beat Arizona involves no run-outs for Arizona and continued dominance on the offensive boards for Houston. Arizona will also try to keep the game pace at a fast pace and score in a hurry while using their talent advantage to the best of their ability. I like Arizona to end up pulling out the win in a pretty competitive matchup.