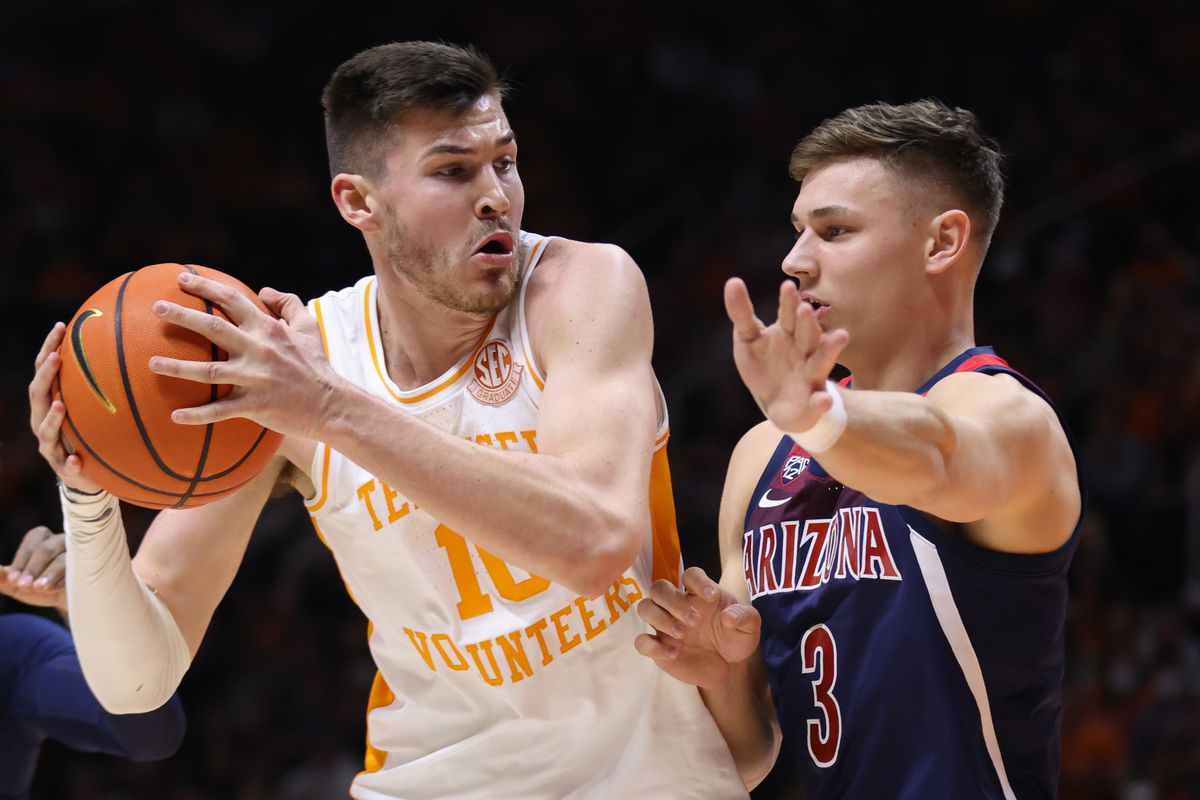 On the last great night of College Basketball before the Christmas break, we had some eventful games and one Top-10 team falling on the road. It was a day that had some great games on early on in the day and that continued throughout the evening which had the big games on the day, which included Tennessee’s win against Arizona. Let’s now dive into the daily roundup as we edge closer towards the Christmas break.

Arizona takes first loss of the season at hands of Tennessee

Heading into a tough road environment, this was going to provide Arizona with a pretty tough matchup, and at least at the start, they were not ready for it. The Volunteers started the game on a 16-2 run, they did a great job of turning defense into offense, scoring off early turnovers, and drilling threes. That start proved to be the difference, as Arizona made rallies at Tennessee but was never able to take the lead. The Wildcats certainly made it a game, Bennedict Mathurin had 28 points and was almost single-handedly keeping the Wildcats alive. With five minutes left, the game was tied, and with bad officiating came Tennessee taking advantage of a Kerr Kriisa technical foul call. Then it was John Fulkerson who scored the basket to put Tennessee up for good, as the Volunteers held on for the 77-73 win.

While it’s never great to lose, this is a loss that leaves me feeling optimistic about Arizona. In a cross-country road trip to a hostile environment, they got an early knockout punch and most teams would’ve folded. Instead, Arizona hung around and gave itself a chance. For Tennessee this is a great win heading into SEC play, the Volunteers got a great performance out of John Fulkerson, while the veterans Vescovi, James, and Powell stepped up. This Volunteers team defends really tough and is able to lock teams up, the main question is how good will this team be once the offense starts to click? That question remains to be answered.

Duke opened up ACC play with a tough matchup against a very good Virginia Tech team, in what may have been the Blue Devils’ toughest home game left on their schedule. Duke trailed at halftime and even by 8 to start the second half before turning it on in the second half to secure the win. Duke went on a 13-0 run over five minutes to take the lead and they never looked back from there, cruising to a 76-65 win. Paolo Banchero continues to look like a polished NBA big, he had what felt like an easy 23 points, Wendell Moore had 18. The biggest key to the game was Duke going small with AJ Griffin at the 4 and Banchero at the 5, having that lineup allowed for perfect switching on the defensive end, while the five out offense allowed for everyone to drive towards the paint.

While Missouri certainly has already proven that they are susceptible to a blowout loss to their other border-state rival, they reaffirmed that they are fully capable of being blown out as they lost by 25 to Illinois. Frankly, saying that this was a 25 point game might be doing some injustice here, as the lead was at 37 with 7:30 left to play before Illinois let them make the score not look as bad, in hopes that maybe Missouri might keep Cuonzo Martin around for next year. Simply put, it is time for a change yet again at Missouri, I get that Martin had bad luck with the Porter brothers and probably would’ve been able to maybe get some juice into the program, but that didn’t happen. While Kim English has only coached a couple of games, he would be a great fit as returning alumni bringing pride to the program, plus an elite ability to get recruits.

It used to be somewhat controversial to write something on why Virginia isn’t as good as they were, now I feel like I’m repeating myself, but I’ll do it anyway. Offensively, they still don’t have a star and don’t have consistent shooting, and unlike the 2020 version of this team that made up for it by not allowing 60 points, this team isn’t all that good defensively either. Sure, they’ll win games in the ACC, but this loss further proves that Virginia won’t be NCAA Tournament bound.

With the Louisville-Kentucky game getting canceled due to COVID-19, Western Kentucky and Kentucky agreed to play, with the proceeds going towards the Kentucky tornado relief fund. This game really wasn’t close, Kentucky took the lead early and just kept the foot on the gas, but the player of the game was Oscar Tshiebwe who grabbed 28 rebounds for Kentucky. Tshiebwe continues to be a rebounding machine, and at this point seems like the favorite to be the Nations rebounding leader.