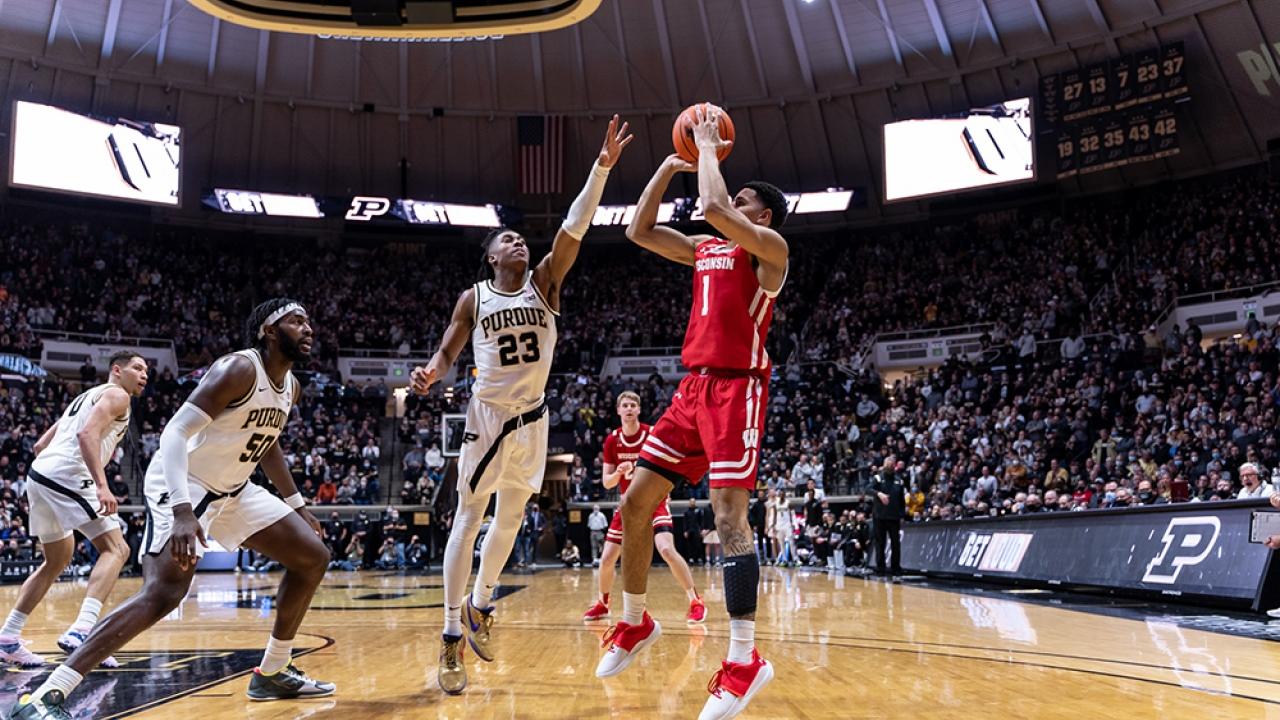 In terms of the amount of games total, Monday gave us very few, but the one premier matchup lived up and exceeded the hype as Johnny Davis and Wisconsin went into Mackey Arena and beat Purdue in what is the signature moment for Davis and the Badgers thus far. There were a few other games of note, including a big performance from Keegan Murray, which will be discussed in the daily roundup.

Coming into this game as 12.5 point favorites, there didn’t seem to be a ton of optimism surrounding the Badgers being able to win in Mackey Arena, but in Basketball sometimes all you need is one player and you can win. For Wisconsin, that player was Johnny Davis, who had the signature performance of the year scoring 37 points, grabbing 14 rebounds, and carrying the Badgers to the win. I’ll get to why he’s the Player of the year favorite in a little bit, but in terms of this type of performance, it is a legendary one.

Davis got started early and helped Wisconsin take a 29-24 lead at the half, but Purdue began to find it’s rhythm. They threw the ball inside to Zach Edey, who wound up with 24 points off the bench and at one point took a 7-point lead, but then Johnny Davis took over, capping off a 10-1 run with a three-pointer to re-establish the lead and Wisconsin held onto it going into the final stretch, where David hit a three to give Wisconsin a five point lead, then made a ridiculous stepback jumper to put the game on ice and seal away a 74-69 win at Purdue. Wisconsin now has two of the more impressive wins, with this one and also a win against a healthy Houston team, which should help them dramatically come seeding time for the NCAA Tournament. As for Purdue, they seem to be at a crossroads, the talent is there but this is now two somewhat head-scratching losses in which they let one player pretty much carry them to a win.

Johnny Davis now has to be considered the clear and obvious favorite for the National Player of the year award now after this performance. Coming into this game, I think there was a discussion between Davis, Ochai Agbaji, Kofi Cockburn, Paolo Banchero, Keegan Murray, EJ Liddell, among others for who should be the favorite for the award, but now we have our favorite. This type of performance in a hostile road environment to single-handedly carry Wisconsin to a win at a Top-5 team is special and something no one else has yet to match. Davis does it all, obviously, he’s a great scorer, but he rebounds, he defends, he can run the offense, and is just a special playmaker. I’m not going to give him the award yet, there’s still plenty of time for others to put on big-time performances like this one, and Davis will need to keep it up, but if the award was given out today, there’s no pick but Davis.

Staying in the Big Ten, Iowa escaped with an 80-75 win against a not-great Maryland team, which isn’t really all that impressive. What is impressive is Keegan Murray, who had 35 points to help lead the Hawkeyes to the victory. Murray leads College Basketball in scoring and is now averaging 23.7 points per game this season, which seems to never be slowing down. Murray doesn’t quite have the signature performance on a big stage yet to where he would be considered a Player of the year favorite, but he should definitely not go unnoticed for how good he has been this season.

It had been nearly two weeks since Arizona last touched the court, so Arizona was due to look a bit rusty, which they were when playing Washington. The defense allowed 41 first-half points, which was not great but the offense was there and looked fantastic. Bennedict Mathurin had a game-high 27 points for the Wildcats, including a highlight-reel dunk, Christian Koloko had a 22 point, 10 rebounds performance, while Arizona went on to win 95-79. Who knows when the Wildcats will play next since it seems about every Pac-12 team is on Covid pause, but they still are really good and that has been reflected whenever they have taken the court.