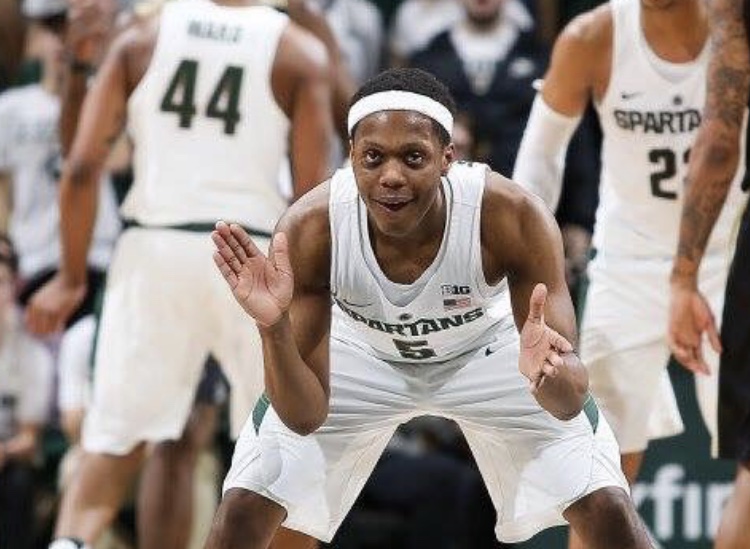 The Spartans are coming off a somewhat disappointing season, as they came into the season with National Championship aspirations but they instead lost to Syracuse in the Round of 32. They then lost Miles Bridges and Jaren Jackson Jr. to the NBA but they do return three starters, so this team should still be good. The trio of Cassius Winston, Nick Ward, and Josh Langford all should be quality players while being team leaders. This team should be considered the favorites to win the Big Ten this year but it would be unlikely to see this team making it to the Final Four this season.

The Spartans have a lot of quality and experienced players that will play in the backcourt this season, headlined by Cassius Winston. Winston is a great passer, with great vision, he has a great basketball IQ, and he can make three-point shots. Winston’s will continue to be one of the best guards in the country but his leadership will be the biggest thing on display this season. Josh Langford has been overshadowed at times in years past but he will get more shots this season. Look for him to potentially lead the team in scoring, while he will continue to be a great defender and good scorer. Matt McQuaid looks to move into the starting lineup this season, he will be a good three point shooter and defender this season. Freshman point guard Foster Loyer should get minutes off the bench, playing as a likely backup point guard for Cassius Winston. Kyle Ahrens has been hampered by injuries in years past but he is a quality player that should play minutes off the bench this season. There might not be as much depth to this Michigan State backcourt but with players like Cassius Winston and Josh Langford leading the way they should be pretty good.

The Spartans have a good one-two punch with Xavier Tillman and Nick Ward, while they have a couple of good big men off the bench. Nick Ward is a great interior big man, who can score at a high level, while he is an elite rebounder, both of those things make him one of the best big men in the Big Ten. Xavier Tillman made significant strides as a freshman throughout the season, now he will likely move into the starting lineup this season. Kenny Goins should help provide some versatility, shooting, and rebounding, which is big for the Spartans, who have a lot of back-to-the-basket type bigs. Marcus Bingham is another 3-point shooting threat, that should get minutes off the bench while being a good fit playing with Tillman or Ward. There are lots of options for rotation minutes up front, and it will be interesting to see what this team looks like this season.

The Spartans have put together a non-conference schedule that will test them once again, which should be good for the Spartans as they look to gain experience this season. The season starts on November 6th, when they will head to Indianapolis to play Kansas in the Champions Classic. After playing three home games, they then head to Las Vegas to play in the Las Vegas Invitational. There they will play UCLA and either Texas or North Carolina, which all three teams are Top-35 teams this season. On November 27th, they will head on the road to Louisville as part of the ACC/ Big Ten Challenge. They will play two Big Ten games in early December, before they head on the road on December 8th to play at Florida. Following that game, they will play three home games leading into Big Ten play. Big Ten play starts for the Spartans on January 2nd where they will play Northwestern at home, conference play ends for them on March 9th, when they host Minnesota. The Big Ten Tournament runs March 13th-17th, with the NCAA Tournament starting on March 19th.

The Spartans could struggle this season, as they look to fill in some holes, while they also deal with a brutal non-conference schedule. The Spartans should be able to pick up a couple of quality wins in non-conference play but they should take a couple of losses in non-conference play. In Big Ten play the Spartans will be the team to beat but they still will probably lose a few games in conference play. Look for them to win the Big Ten regular-season title and potentially win the Big Ten Tournament. In the NCAA Tournament, they should be a tough team to beat and they could potentially make a run to the Final Four this season.