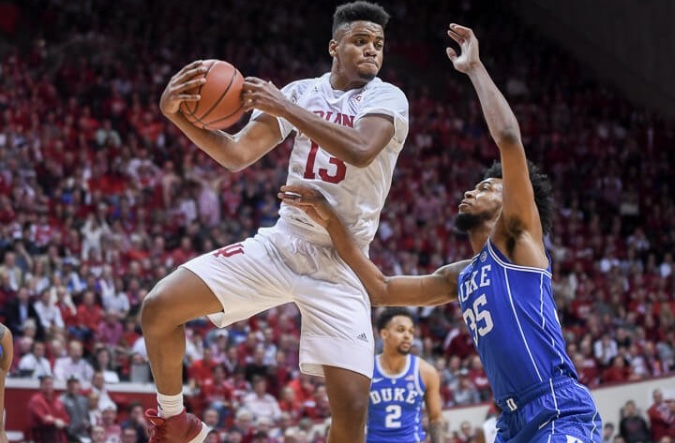 The Hoosiers enter year two of the Archie Miller era with a team that has the talent to compete and win the Big Ten regular-season title. The star player, of course, will be Five-Star freshman Romeo Langford, who the Hoosiers convinced to stay in-state and attend Indiana. He will be joined by another All-Big Ten level player in Juwan Morgan, who should be a good contributor inside. The Hoosiers also have a good set of players surrounding them with De’Ron Davis, Justin Smith, and Devonte Green all returning this season. That core, plus the addition of a few four-star recruits help make this one of the best teams in the Big Ten.

The headliner of course with the Hoosiers in the backcourt is five-star freshman Romeo Langford, who should put up massive numbers in what looks to be his only season at Indiana. Langford is an elite scoring guard, who can make shots from everywhere and can get shots up over everyone due to his 6’6” frame. Devonte Green will start the season as the teams point guard, he will likely take a step forward and become a more consistent player at the point guard position. Look for guards Aljami Durham and Robert Phinisee to both push Green at the point guard position, both of whom are good ball-handlers that can score the ball. Zach McRoberts will get minutes this year, as does a lot of little things that can help the Hoosiers win basketball games. Overall this backcourt will need to get solid play at the point guard position to succeed this season, if they get that and they get what they get what most expect out of Langford, this team will be set up for success.

The Hoosiers have a frontcourt that has a lot of versatile players, which will be a hard thing for other teams to guard. Juwan Morgan is coming off a great season where he averaged 16 points per game, while he won’t need to put up those types of numbers, the Hoosiers still expect him to be really good this season. De’Ron Davis is expected to be the anchor inside for the Hoosiers, as he has great size and athleticism, the only question with him will be if he can stay healthy this year. Justin Smith is a versatile wing, who has great size and athleticism which will likely help him be the starter day one for the Hoosiers. Jerome Hunter is another 6’7” forward who should provide some versatility while playing both the three and the four. Race Thompson expects to get some minutes off the bench after missing last season due to injury, while St. Mary’s transfer Evan Fitzner should help play some five when Davis is out.

The Hoosiers have put together a schedule that will get them a few challenges but it doesn’t overwhelm them. The Hoosiers start the season with three straight home games, which does include a home game against Marquette on November 14th, the Hoosiers then will play at Arkansas on November 18th. After a couple of buy games, they will then head on the road to Duke on November 27th as part of the ACC/ Big Ten Challenge. They will play Northwestern at home and Penn State on the road as part of the Big Ten schedule, before they head back home to play Louisville on December 8th. On December 15th the Hoosiers will play Butler in the crossroads classic, which will be the final game not at home in non-conference play. The Hoosiers will start the main portion of the Big Ten schedule on January 3rd playing at home against Illinois, with the Big Ten schedule wrapping up on December 10th when they play Rutgers at home. The Big Ten Tournament runs March 13th-17th, with the NCAA Tournament beginning on March 19th if the Hoosiers make it back to the Tournament.

The Hoosiers have a non-conference schedule that will present them with a couple of opportunities to pick up some quality wins. Look for them to maybe beat Marquette or Duke, while they should be able to take care of Louisville, Arkansas, and Butler in non-conference play. The Big Ten schedule is 20 games this season, which will challenge them a little more than usual but this team has enough talent and depth to be able to succeed in Big Ten play, as they should probably go around 13-7 in league play. From there they might be able to win the Big Ten Tournament this season, while a deep NCAA Tournament run is certainly in play as they have a talented enough team to compete against other NCAA Tournament teams.