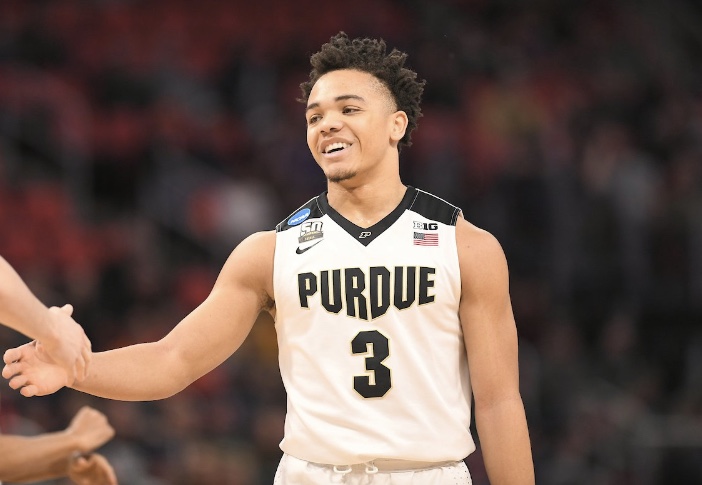 The Boilermakers are coming off a year where they finished 2nd in the Big Ten, entered the NCAA Tournament as a two seed and made it to the Sweet 16. Following the season through the Boilermakers saw Isaac Haas, Vince Edwards, Dakota Mathias, and PJ Thompson all graduate, meaning this years team will look brand new. The Boilermakers do lose a lot but one player they don’t lose is Carsen Edwards, who was the sports best shooting guard last year and he will be one of the early favorites to win the National Player of the year award this season. While Edwards should be excellent, the real key will be for players like Nojel Eastern and Matt Haarms to make big jumps this season. At their best this team could compete to win the Big Ten title, however, there is a chance they struggle and just make it into the NCAA Tournament.

The star player for the Boilermakers is guard Carsen Edwards, who won the Jerry West award last year as a Sophomore. Edwards is an excellent shooter, a great athlete, and a capable passer, who should put up gigantic numbers this season, while he could potentially lead the country in scoring. Nojel Eastern will likely run the point for the Boilermakers, as he is a good ball-handler and he is a switchable defender. Ryan Cline will start at the three and provide the Boilermakers with another great three-point shooting threat. Freshman Eric Hunter will get a lot of minutes of the bench for Purdue as he can provide ball-handling and scoring off the bench. Grady Eifert is a long wing who has experience which will help him get a lot of minutes. The star will, of course, be Carsen Edwards, however, a key will be the growth of players like Nojel Eastern and Ryan Cline, as well as the play of Grady Eifert and Eric Hunter off the bench.

The Boilermakers have a solid frontcourt, that has lots of defensive capabilities but not a whole lot of experience playing together. The key addition will be Evan Boudreaux, a grad transfer from Dartmouth, who should be a good physical player, that can shoot at a high level. Matt Haarms is a well-known hair-flipper, however, his ability to block shots inside makes him a very valuable piece for the Boilermakers. Redshirt freshman Aaron Wheeler is an athletic forward, who has the traits to be a good defender and should play a valuable role for the Boilermakers. Four-Star forwards Trevion Williams and Emmanuel Dowuona are both forwards who will get minutes as freshman and both will look to become starters going forward for Purdue.

The Boilermakers have a very tough schedule, which will give them plenty of opportunities to pick up quality wins to help them make the NCAA Tournament. They start the season with two buy games before they head to the Charleston Classic, where they could face Virginia Tech, Alabama, Wichita State, or Davidson, depending upon the matchups they get. Their schedule doesn’t get any easier from there as they will play at Florida State in the ACC/ Big Ten Challenge, followed by their first two Big Ten games. The Boilermakers will then head on the road to play at Texas, before playing Notre Dame in the Crossroads Classic. The Boilermakers restart Big Ten play on January 3rd playing at Iowa and they will finish the season on March 9th at Northwestern. The Big Ten Tournament runs March 13th-17th, with the NCAA Tournament beginning on March 19th if they are able to make it back there.

The Boilermakers will likely struggle out of the gates as they will be trying to mesh together players, while they play a really difficult schedule. With that their record will not be as good as they actually are. Once Big Ten play starts up the Boilermakers should be a better version of themselves, which will help them compete at the top of the Big Ten standings. Look for Purdue to be a fringe Top-25 team throughout Big Ten play and be in contention late to win the Big Ten regular-season title. The Boilermakers will have a chance to win the Big Ten Tournament and they are a team that is very capable of getting back to the Sweet 16 for a third straight season.