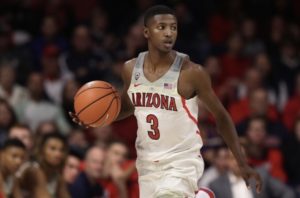 Last year the Wildcats dealt with injuries and the FBI Investigation in route to winning the Pac-12 regular season and postseason tournament. The Wildcats started the season 3-0 but then lost all three games in the Battle 4 Atlantis to finish the tournament in eighth place. The Wildcats responded nicely though winning their final seven non-conference games, which included wins against Alabama, Texas A&M, and at UNLV. The Wildcats started conference play by beating #3 Arizona State 84-78, which helped establish Arizona as the best team in the Pac-12. The Wildcats followed that up winning 8 of their next 9 games to take a big lead in the Pac-12 standings. The Wildcats then lost back to back games at Washington and at home against UCLA but they responded nicely beating USC at home and Arizona State on the road. The Wildcats beat Oregon State but then got news of a reported $100,000 payment made to star-center Deandre Ayton made by Sean Miller. Miller missed their next game at Oregon, while Ayton was still allowed to play. In that game, the Wildcats lost 98-93 in overtime. Miller returned to the sidelines for the final two games, where the Wildcats won both games to secure the Pac-12 regular season title outright. The Wildcats then got on a roll in the Pac-12 tournament, beating Colorado, UCLA, and USC to claim another Pac-12 Tournament title. The Wildcats successful season got them into the NCAA Tournament as a four-seed, where they matched up against Buffalo, unfortunately for them, they would fall 89-68 to end their season. Deandre Ayton was the best player on the team, averaging 20.1 points and 11.6 rebounds per game. Allonzo Trier averaged 18 points per game, while Rawle Alkins averaged 13 points per game.

The Wildcats have a tough non-conference schedule this season as they will play a lot of tough non-conference games, which should help them in terms of seeding for the NCAA Tournament. The Wildcats start the season with three easy matchups but will then head to Maui Invitational, where they will face some tough opponents, that will include Iowa State, and potentially Gonzaga, Duke or Auburn depending on how the Bracket breaks. The Wildcats will play at Uconn and Alabama, as well as Baylor in non-conference play. The Wildcats will start Pac-12 play on January 2nd and will end the season with a home game against Arizona State. The Pac-12 Tournament is the following week, with the NCAA Tournament starting on March 19th if they get there.

The Wildcats lost a lot from last years team, as Deandre Ayton, Allonzo Trier, and Rawle Alkins all left for the NBA early, however, they still have a pretty good team coming back. Five-Star point guard Brandon Williams will likely start at the point guard position and he could lead the team in scoring. Dylan Smith was a solid player off the bench last season but he should get more minutes this season. Brandon Randolph should take off in his sophomore season, likely scoring more this season. Pitt grad transfer Ryan Luther should come in and be able to start right away for the Wildcats, becoming a key player down low. Duke grad transfer Chase Jeter has not lived up to his hype yet but he is still a five-star talent who could have a huge season this year. Off the bench, Alex Barcello and Justin Coleman should be able to back up Williams if he has any freshman struggles. Emmanuel Akot hasn’t yet proven anything in college but he still is a five-star talent that could help Arizona win games. Devonaire Doutrive and Ira Lee should both be able to provide some help off the bench as well. Overall this roster is actually not as bad as it was originally thought to be and it could actually compete atop the Pac-12 standings if things go right this season.

The Wildcats will likely start the season a bit slow but once Pac-12 play rolls around they should start to find themselves as a team. Early on they’ll have to play in the Maui Invitational, which has an absolutely loaded field that will likely give them fits and lead them to a couple of losses. They’ll also play at Uconn and Alabama, two tough road tests that could lead to a loss. Playing Baylor at home is a winnable game that will be tough though. I think it’s very likely you see this team going 10-3 in non-conference play and that will keep them in position to make the tournament. The Pac-12 pairings have come out and it looks like the Wildcats will only get Washington at home once and they’ll have to play at UCLA and Oregon as their only games against those two schools. In all likelihood, they’ll probably end up going around 12-6 in conference play, which will leave them close to the bubble on Selection Sunday, although they should get in. Look for them to maybe win a game in the NCAA Tournament, although if things break right I wouldn’t rule out a surprise second weekend run by Arizona.