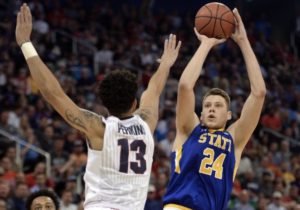 The Jackrabbits return everyone but Reid Tellinghuisen from a team that went 28-7 and won the Summit League last year. Mike Daum looks to win another Summit League Player of the year award while trying to become an All-American. Freshman guard David Jenkins showed signs of greatness in his first year at South Dakota State. This year the Jackrabbits will look to win the Summit again while hoping to make a surprise run in March.

The Jackrabbits have lots of pieces to work within the backcourt, as they have multiple ball-handlers and lots of shooting. The headliner in the backcourt is David Jenkins, who won Summit League Freshman of the year last year and should continue to put up good stats alongside Mike Daum this year. Tevin King should help out running the point guard position, as he has shown to be a good passer and scorer. Brandon Key led the team in assists coming off the bench last year and should do the same with more minutes this season. The Jackrabbits also have a couple of freshmen in Owen King and Austin Arians who both should provide depth this season.

The Jackrabbits obviously will be led by Mike Daum, who has been fantastic thus far in College and will likely win his third Summit League Player of the year award this season. Daum should once again average 20 and 10, while likely shooting over 40 percent from three. Skylar Flatten will probably start alongside Daum and help stretch the floor as an undersized small-ball four. The Jackrabbits have options inside but they will need players like Ryan Kruger, Alou Dillion, and Aaron Fiegen to step up as a freshman this season.

The Jackrabbits should once again win the Summit League this season as they are the heavy favorites based on the talent and experience they have on their team this season. The Jackrabbits should win the Gulf Coast Showcase early on and they’ll likely pile up some more victories in November. December will be a tough month for the Jackrabbits as they’ll have to play Memphis and Nevada on the road, which could result in a couple of losses. Once Summit League play starts the Jackrabbits will start to roll and win another league title. The Jackrabbits will likely win the League Tournament again, which will put them back into position to win games in the NCAA Tournament. Don’t be surprised if they win a couple of games in the NCAA Tournament as they have the talent and experience to win games in the tournament.