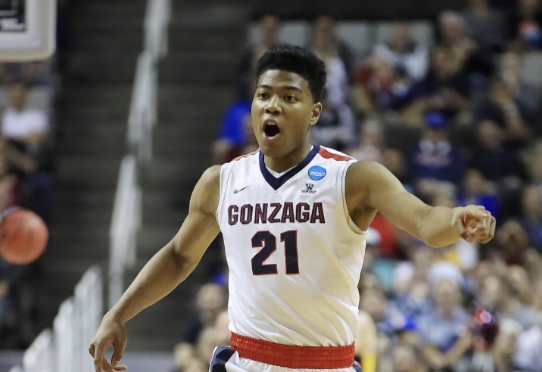 The Bulldogs enter this season once again as the heavy favorites to win the West Coast Conference, while they look poised to potentially make a deep run in the NCAA Tournament. The Bulldogs have an elite one-two combo in the backcourt with Josh Perkins and Zach Norvell Jr, while Killian Tillie and Rui Hachimura are both great pieces down low. While that core of four players is going to be good for the Bulldogs once again, the thing that makes this a title contender is the additions of veterans Brandon Clarke and Geno Crandall, who both transferred up to Gonzaga from mid-major programs. Having this large amount of talent on this roster will challenge them early in terms of getting players minutes but it will be what helps them potentially make a deep NCAA Tournament run.

The Bulldogs have a great backcourt duo with Josh Perkins and Zach Norvell Jr, who are both great returning players who contribute to winning. Josh Perkins is the team leader, he has played in many big games for Gonzaga, including their run to the title game in the 2017 NCAA Tournament. Perkins should continue to be solid at the point guard position, as he has a high assist rate, while he looks to limit turnovers on offense. Zach Norvell Jr. is a great scorer, he showed this in the first two games of the NCAA Tournament last year, when he drilled so many big shots to get Gonzaga to the Sweet 16. North Dakota grad transfer Geno Crandall is another ball-handler, he is a good scorer, shooter, and a good passer all things that help contribute to winning basketball games. Joel Ayayi is a backup option at the point guard spot, he is expected to be a good shooter playing off the bench. Corey Kispert could potentially start for Gonzaga, depending upon how they want to play, he is a good shooter, passer, and defender, while he’s tall enough to play at either the 3 or the 4. Overall this is a really deep unit with a lot of scoring options, which should make this a fun team to watch this year.

The Bulldogs have three great options to play down low, as Rui Hachimura, Brandon Clarke, and Killian Tillie all look to be great players for Gonzaga this season. Hachimura is the star player for the Bulldogs, he is a 6’8” forward, who is very versatile, athletic, and he has the ability to score from anywhere, this should make him a tough guard for many teams. Killian Tillie is one of the best bigs in the country as he is also very athletic, a good shot-blocker, and he is a good rebounder, however, the thing that makes him a really tough player to guard is his ability to step out and hit threes. Brandon Clarke is a transfer from San Jose State who should get big minutes this season, Clarke was an elite scorer, rebounder, and shot-blocker while at San Jose State. Filip Petrusev is a 6’11” Forward who should get some minutes off the bench this season, he is a good athlete who promises to be a solid replacement for some of the frontcourt players who might leave to the NBA Draft down the line. Overall this unit is very deep with Tillie, Hachimura, and Clarke all looking to be elite level players for Gonzaga this season.

The Bulldogs have loaded up in non-conference play, as they will have multiple Top-25 matchups before West Coast Conference play begins. The Bulldogs start the season with three straight home games, headlined by a November 15th matchup against Texas A&M. They then will head to the Maui Invitational, where they will play Illinois in the first round and they could play Iowa State, Duke or Auburn later in the event. The Bulldogs return home for one game, before playing at Creighton on December 1st, followed by a December 5th matchup at home against Washington. On December 9th, the Bulldogs will play Tennessee in Phoenix as part of the Jerry Colangelo Classic. The Bulldogs will then head on the road where they will play at North Carolina on December 15th. Following that game then will head home to play four straight home games, before the start of West Coast Conference play. The Bulldogs start WCC play on January 5th playing Santa Clara at home, while they finish the regular season on March 2nd playing at St. Mary’s. The West Coast Conference Tournament runs March 7th-12th, with the NCAA Tournament beginning on March 19th this season.