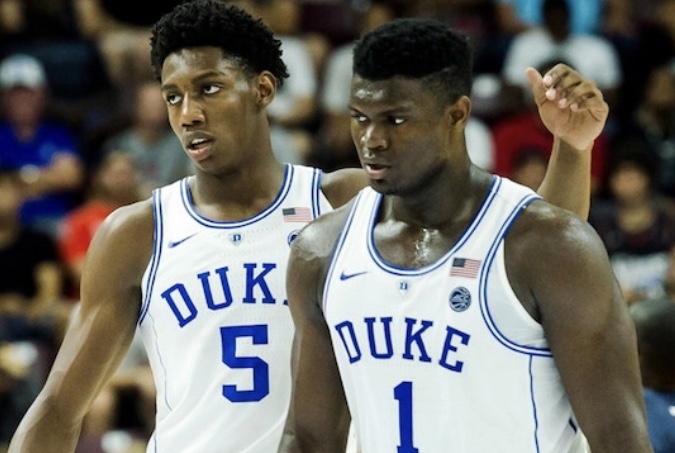 The Blue Devils come into this season with the best recruiting class ranking wise in College Basketball history, as they got the Top-3 recruits in the sport while having a total of four Five-Star prospects. Zion Williamson comes into this season as the most exciting player in the sport, as he is an incredibly athletic player, while RJ Barrett looks like the heavy favorite to be the First pick in the upcoming NBA Draft. Those two get the majority of headlines but Cam Reddish is a Top-3 recruit, while Tre Jones looks poised to take over the reigns at the point guard position. While those four look poised to have a great season, this team is lacking experience, which will be a big thing to watch this season. Will their talent at the top run some teams out of the gym? Yes, but it will be tough for a team that is so freshman reliant to go through the ACC regular season grind, which could be a thing that hurts the Blue Devils this season.

The Blue Devils have three great freshmen in RJ Barrett, Cam Reddish, and Tre Jones, who should be great this season. Barrett is the top freshman in the class of 2018, he is a long-athletic guard, who can get to the rim at will, hit jump shots at a high rate, and he can sometimes get hot from three. Cam Reddish is a versatile wing, who projects as the teams best perimeter defender while being a good isolation player. Tre Jones is the younger brother of Tyus Jones, he should step in as the teams point guard, he won’t put up great stats but he will run this team at a solid level. Jordan Goldwire is an up and coming point guard off the bench, while Alex O’Connell should get some more minutes this season as he provides some great three-point shooting off the bench. This team should be solid in the backcourt, as they bring some great freshmen to lead their team, however, the big problem on relying so much on freshman is that they can be inconsistent.

The Blue Devils have an interesting frontcourt, as the have Zion Williamson, who is a 4 but has the physicality to play the 5, which could provide some interest from the Blue Devils. Zion Williamson looks to be star player, he is a freak athlete, who can dunk, unlike any basketball player we have seen before. Zion is only 6’6” but he is around 280 pounds of all muscle, which could be interesting as he could play a small-ball five as he can bang with bigs. Javin DeLaurier should start, he is a good defender, a solid scorer inside and a good rebounder, which all is good. Marques Bolden will fight for minutes, he’s had a rough couple of years but he is a former Top-20 recruit who could potentially break out this season. Joey Baker reclassified into this years class, he should provide some shooting playing at the 4. Overall this unit should be interesting to watch, as they have the potential to be one of the toughest frontcourts to guard in the sport, a lot will just depend upon how good their players play this season.

The Blue Devils should be one of the most fun teams to watch in the sport this season, as they potentially have three Top-5 picks on their roster this season. The Blue Devils will have a tough start to their season, as they will be playing four freshmen a lot of minutes, while also playing against some of the best teams in the sport, meaning they could struggle early on and enter ACC play with a worse record than they usually do. Struggles could continue ACC play but this team should get better as the season goes along, as they look poised to finish either second or third in the conference. Once Tournament play begins, you should start to see the best version of this team, as they could easily win the ACC Tournament and make a run to the Final Four or win a National Championship if things break right for them this season.