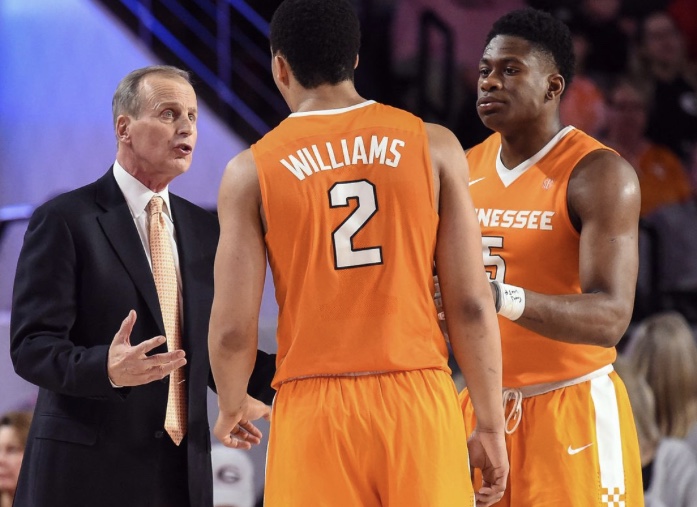 The Tennessee Volunteers last year were projected to finish 13th in the SEC, instead, they shocked everyone by going 13-5 and winning a share of the league title. The Volunteers were able to enter the NCAA Tournament as a three-seed but they were stunned late by Clayton Custer and Loyola-Chicago. The Volunteers saw Grant Williams win SEC Player of the year, while Head Coach Rick Barnes won SEC Coach of the year. The Volunteers are able to return mostly everyone, as the only player leaving from last years team is guard James Daniel. Jordan Bone, Jordan Bowden, and Lamonte Turner continue to be good pieces in the backcourt, while the Volunteers return Williams, Admiral Schofield, Kyle Alexander, Derrick Walker Jr, and John Fulkerson. This team should continue to be pretty good, the main question though will be how much better they can get. If they get just a little better this is a title contender, otherwise, this should still be a Top-15 level team similar to last year

The Volunteers have a solid three-headed monster at the guard position, which meshes well with their great frontcourt. Jordan Bone is the starting point guard for this team, he can get to the rim with ease but he is more known for his passing ability, while he is also great on the defensive end. Jordan Bowden is a great shooting guard playing next to Bone, Bowden hits threes at a high level, which is important for their floor spacing. Lamonte Turner acts as a spark plug off the bench as he can score in bunches, he will need to play some point guard off the bench at times though, something he wasn’t asked to do last year. Jalen Johnson will likely play some minutes at a guard position, he didn’t get many minutes last year but he should get more this season. Overall Tennessee has a solid group in the backcourt but it is not great and it will not be what gets Tennessee far into the NCAA Tournament.

While the Volunteers don’t have a great backcourt, they will more than make up for it in their frontcourt, as they have a ton of great players up front headlined by reigning SEC Player of the year Grant Williams. Williams is a good scorer inside and a good rebounder, while he does a lot of the dirty work that leads to this team winning games. Admiral Schofield adds some good offense alongside Williams, he can shoot the ball from deep, while he is more physical than most of the players he goes as he plays at the three position. The Volunteers have a great inside big in Kyle Alexander, he is a high volume rebounder, while he can block shots inside. Derrick Walker Jr. is a solid big man coming off the bench, he should continue to play a role for this team. John Fulkerson is another solid big man off the bench, he is a good rebounder and defender playing in a limited role. Overall this unit is great as they have two All-League level players in Schofield and Williams, while other players do help do a lot of things to contribute to winning.

The Volunteers have one of the toughest schedules in the sport, however, with a team that returns virtually everyone they should be up to that task. The Volunteers will get a couple of Top-10 matchups early in the season, that the Volunteers could win, which is their goal. After playing Gonzaga this team should start to get on a roll heading into conference play, while they look poised to get off to a hot start in conference play. The Volunteers should be able to avoid taking tough losses to lesser teams but they could struggle against some of the other top teams in the conference, which might cost them a chance at repeating as SEC Champions. The Volunteers will look to get back to the SEC Championship game this season, except they will look to win that game to help get a high seed in the NCAA Tournament. In the NCAA Tournament this team should avoid early upsets and if they can get the right matchups later into the Tournament this team could make a Final Four or win a National Championship.