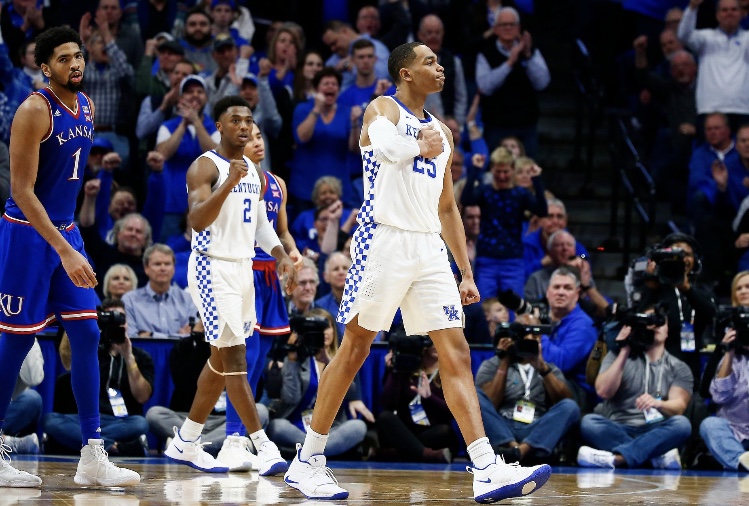 This week was a little quieter at the top, as most of the teams either won games or lost games that they were expected to lose in the cases of Kansas and Michigan State. The real movement came from other teams ranked outside the Top-10, as most of the teams ranked in that area of my rankings lost at least one game and a couple of teams lost multiple games. See how my Power Rankings shaped up following all of this past week’s results.

1.Duke: The Blue Devils didn’t play well this week by their standards but they really didn’t need to, they went 2-0 with wins at Pittsburgh and over Georgia Tech.

2.Virginia: The Cavaliers got mad after their loss to Duke and responded by beating Wake Forest by 23 and winning at Notre Dame by 27.

3.Tennessee: The Volunteers made us question whether or not they were worthy of being ranked at number one in the AP Poll, as they trailed in games against Vanderbilt and West Virginia. That being said they won both games and in their win at Vanderbilt Grant Williams had a career-high 43, while shooting 23 of 23 from the free throw line.

4.Michigan: The Wolverines won at the buzzer against Minnesota, then they won at Indiana pretty handily. All in all another good week for the Wolverines.

5.Michigan State: The Spartans picked up a nice road win at Iowa but suffered a tough loss at Purdue, this Spartans team has been really impressive in Big Ten play but it finally looked like the Spartans injury issues finally caught up with them in this game.

6.Kentucky: The Wildcats used Saturday’s game against Kansas to get an idea of where they are at as a team, they passed that test by beating Kansas by 8.

7.Gonzaga: Another week, another two wins for the Bulldogs, they will play at BYU this week, which could be tough.

8.Kansas: The Jayhawks won a big game over Iowa State, which helped them take the lead in the Big 12 standings. The Jayhawks played well at times at Kentucky but they wound up falling. Next up a tough week that will include a game at Texas and against Texas Tech on Saturday.

9.Marquette: Another week another two wins for the Golden Eagles as they beat DePaul and won at Xavier. They have a tough three-game stretch upcoming as they will play at Butler, then playing St. John’s and Villanova at home.

10.Villanova: The Wildcats continue to roll through the Big East as they beat Butler on the road, while also beating Seton Hall. The Wildcats are now 7-0 in Big East play.

11.LSU: The Tigers struggled with Georgia but won, however, they looked like they would fall at Missouri as they trailed by 14 late in the second half before coming from behind to beat the Tigers 86-80 in overtime.

12.North Carolina: Don’t look now but the Tar Heels have won three straight games, which included a 103-82 blowout win over Virginia Tech. They will have a couple of tough road games at Georgia Tech and at Louisville this week.

13.Purdue: The Boilermakers won at Purdue on Wednesday, then knocked off a Michigan State by winning 73-63. The Boilermakers have now won five straight games and the real key has been the emergence of their role players like Nojel Eastern and Ryan Cline. Their streak should probably continue as they have easy games at Penn State and at home against Minnesota.

14.Nevada: After not blowing teams out in the past and losing NET rating points, the Wolfpack rolled Colorado State, winning by 40.

15.Iowa State: The Cyclones put up a good fight at Kansas on Monday but they ended up losing, however, their response was beating Ole Miss on the road pretty handily, so not a bad week for the Cyclones.

16.Houston: Another week, another two wins. The Cougars just appear to be on another level than all the other AAC programs.

17.Virginia Tech: The Hokies were participants in two blowouts this week, first they lost by 21 at North Carolina but they responded with a 78-56 win over Syracuse, which headlined by 35 points by Justin Robinson.

18.Texas Tech: The Red Raiders lost a tough game at Kansas State to extend their losing streak to three games but they squeaked by Arkansas on Saturday to end that streak and also win the Big 12/SEC Challenge for the Big 12.

19.Louisville: It wasn’t always easy but the Cardinals won two games this week as they beat NC State 84-77 on Thursday, then they beat Pittsburgh 66-51 on Saturday. The Cardinals are in a good position to get a high seed if they continue to win the games they are supposed to.

20.Wisconsin: The Badgers followed up a good win over Michigan by beating Illinois and Northwestern this week, they will have a challenging week ahead as they play at Nebraska and then Maryland.

21.Oklahoma: The Sooners had been somewhat underwhelming as of late but this week they got back on track, first by winning at Oklahoma State and then by beating Vanderbilt by 31 in the Big 12/ SEC Challenge.

22.Maryland: The Terrapins lost 69-55 at Michigan State, which isn’t surprising at all but to follow that up by losing to Illinois in Madison Square Garden is not ideal.

23.Kansas State: The Wildcats continued their dominance in Big 12 play on Tuesday by beating Texas Tech 58-45 but to follow that up with a 65-53 loss at Texas A&M is less than ideal. The Wildcats gameplan is simple, if they don’t make jumpers they don’t win games, which was shown on Saturday.

24.Buffalo: The Bulls took their first MAC loss this week as they fell 77-75 at Northern Illinois, they followed that up with a nine-point win at Kent State, which is decent.