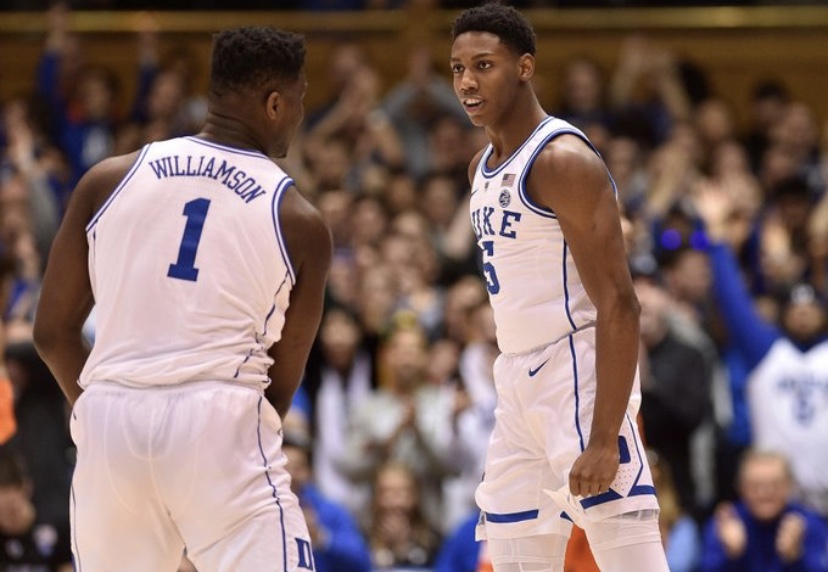 This past week was wild with six of my Top nine teams dropping games including all of my Top-3 teams. With all this madness at the top, we are definitely in need of a new Power Rankings.

1.Duke: The Blue Devils lost to Syracuse on Monday but that was without both Tre Jones and Cam Reddish so I will give them a break, especially considering they followed that up with a signature 74-72 win over Virginia, RJ Barrett and Zion Williamson were both spectacular late in that game to guide the Blue Devils to the win.

2.Virginia: The Cavaliers lost their first game to Duke on Saturday but I’m not going to overreact and move them down for that. They didn’t shoot the ball well in that game, if they make a couple more shots they probably win this game.

3.Tennessee: The Volunteers didn’t play well this week, especially in their win over Alabama but credit is deserved for them scratching out two wins.

4.Michigan State: The Spartans are now in first place in the Big Ten with a 7-0 record. They had to play shorthanded with no Josh Langford but they still beat Nebraska on the road 70-64.

5.Michigan: The Wolverines took their first loss of the season on Saturday after they lost at Wisconsin 64-54. The Wolverines are a great defensive team but if they have scoring droughts as they did on Saturday they are going to lose games.

6.Gonzaga: The Bulldogs once again went 2-0 this week as they beat Loyola Marymount and Portland this week.

7.Kentucky: The Wildcats picked up a huge road win at Auburn this week which is the type of signature win this team needed. The Wildcats now are starting to look like the type of team that was a consensus Top-5 team preseason.

8.Kansas: The Jayhawks beat Texas and appeared to have a game at West Virginia sealed away, before letting the Mountaineers score the final six points to lose. The Jayhawks moved into first place in the Big 12 though after Texas Tech lost twice this week. Overall this team has cause for concern, the reason they potentially lost to the Mountaineers was due to inexperience and not getting the ball to Dedric Lawson late in the game.

9.Marquette: The Golden Eagles beat Georgetown on the road without Markus Howard, which is really impressive. They then beat Providence at home on Dwayne Wade Day.

10.Villanova: The Wildcats continue to roll through the Big East, this week by beating Xavier 85-75. The Wildcats will have their work cut out for them this week when they play at Butler, a place they tend to struggle.

11.Virginia Tech: The Hokies got blown out at Virginia this week but that tends to happen to teams. Next up will be games at North Carolina and home against Syracuse.

12.Maryland: The Terrapins remained one of the hottest teams in the sport this week by picking up two more quality wins, first by beating Wisconsin 64-60, then by beating Ohio State 75-61 on the road. The Terrapins will be tested this week though when they play at Michigan State tonight.

13.LSU: The Tigers are 4-0 in SEC play and they look right now like one of the best teams in the conference. This week they beat Ole Miss 83-69 on the road and beat South Carolina 89-67. If they keep up this play they should roll through their next few SEC games.

14.Nevada: The Wolf Pack had a tough week as they only beat Boise State by one and then they struggled with Air Force. If they continue to play like this they will not move up in the NET Rankings and are likely going to get stuck with a lower seed, despite having a great record.

15.Texas Tech: The Red Raiders lost not once but twice this week, as they lost to Iowa State at home and then at Baylor. Things don’t get any easier as they play at Kansas State on Tuesday.

16.Buffalo: The Bulls continue to run through the MAC as they beat Western Michigan and Eastern Michigan this week. This week they will play two road games at Northern Illinois and at Kent State.

17.Kansas State: The Wildcats were in jeopardy of losing to West Virginia at home as they were down 21 but they stormed back to beat them since then they won at Iowa State and Oklahoma and beat TCU. This team has risen from the dead and now is in first place in the Big 12.

18.Houston: The Cougars picked up two road wins at SMU and at USF this week. They play East Carolina at home, followed by a road game at Tulsa.

19.North Carolina: The Tar Heels took care of business as they beat Notre Dame and won at Miami. They’ll be tested this week as they play Virginia Tech and at Georgia Tech.

20.Iowa State: The Cyclones picked up a signature win at Texas Tech this week and they followed that up with a win over Oklahoma State. They are now in first place in the Big 12 but they play at Kansas and at Ole Miss this week.

21.Ole Miss: The Rebels lost their first SEC game this past week as LSU beat them 83-69. They responded by beating Arkansas 84-67 on Saturday which made their SEC record 4-1. The Rebels will have a tough week ahead as they will play at Alabama and Iowa State at home.

22.Louisville: The Cardinals picked up wins over Boston College and at Georgia Tech this week. They’ll play NC State and Pittsburgh this week, which are two tough opponents.

23.Purdue: The Boilermakers have now won three straight games, including a 70-55 win over their rival Indiana. They will be tested this week as they play at Ohio State and Michigan State.

24.Wisconsin: The Badgers suffered a tough 64-60 loss at Maryland on Monday but responded by beating Michigan 64-54 on Saturday. For knocking off the undefeated Wolverines the Badgers deserve to be ranked.

25.Iowa: I have been hard on the Hawkeyes this year and that is because I still don’t think they are that great, that being said they have won five straight games in Big Ten play so I must rank them.