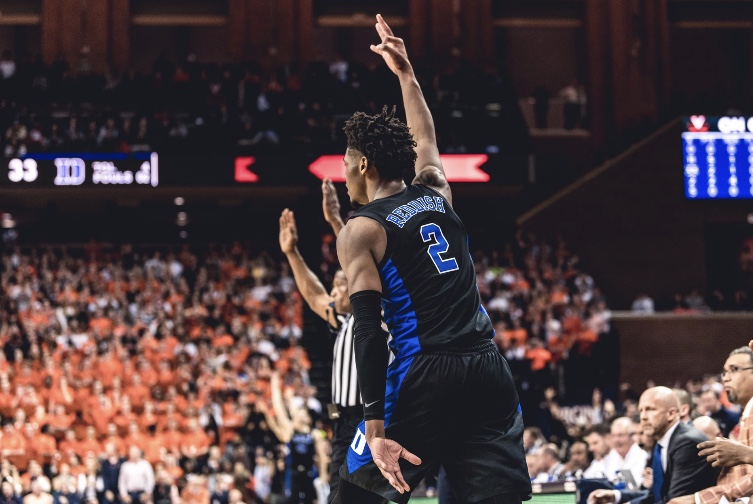 This past week was big on multiple fronts, game-wise t four of my Top-10 teams lost while Saturday’s action proved to shake the Rankings out. The other big thing that happened was the Bracket Preview show that took place Saturday. Following all of this action from this past week here is a brand new Power Rankings.

1.Duke: The Blue Devils had a great week as they beat Boston College, got ranked number one overall in the Bracket Preview and then won at Virginia behind a great shooting night. If the Blue Devils shoot like they did on Saturday on a consistent basis, they may not lose again.

2.Tennessee: The Volunteers beat Missouri and Florida this week, next up a game against South Carolina before their big showdown at Kentucky.

3.Gonzaga: The Bulldogs just destroyed San Fransisco and St. Mary’s, the Bulldogs look like they will the table and make the NCAA Tournament with two losses.

4.Virginia: The Cavaliers are 20-2 right now with both losses coming to Duke, they are a good team but they now are likely out of the discussion for the number one overall seed.

5.Michigan: The Wolverines beat Rutgers and Wisconsin this week, they have an easy week this week but things pick back up the following week when they play Michigan State.

6.Kentucky: The Wildcats picked up a big win at Mississippi State, this week will be a big week as they play LSU and Tennessee at home.

7.North Carolina: The Tar Heels beat NC State by 17 but needed overtime to beat Miami. Tonight they will play a very good Virginia team who is coming off a tough loss to Duke.

8.Marquette: The Golden Eagles dropped a home game against St. John’s, which wasn’t great but picking up a win over Villanova proved that this program has arrived.

9.Villanova: The Wildcats lost a tough game at Marquette, so they won’t be going undefeated in Big East play.

10.Purdue: Two games, two wins for the Boilermakers, they will have a tough matchup at Maryland on Tuesday but if they win that they could run the table in the Big Ten.

12.Houston: The Cougars took first place in AAC as they beat UCF on the road and then they beat Cincinnati at home. The Cougars now have the inside track to win the AAC.

13.Michigan State: The Spartans lost their third straight game this week as they lost at Illinois, they then beat Minnesota to avoid falling further in the Big Ten standings. Things don’t get any easier as they play at Wisconsin on Tuesday.

14.Kansas: The Jayhawks lost at Kansas State, lost Lagerald Vick but they did beat Oklahoma State. They are two games back in the Big 12 standings, so they really need to win at TCU this week.

15.LSU: The Tigers picked up two big wins this week as they won at Mississippi State and beat Auburn at home. This week they will face their toughest test yet as they play at Kentucky.

16.Kansas State: The Wildcats have taken a two game lead in the Big 12 standings after they beat Kansas and Baylor this week. If they can get by 1-1 or 2-0 this week when they play at Texas and Iowa State at home, they will have the inside track to win the Big 12.

17.Iowa State: The Cyclones were rolling but they then lost to TCU at home, they play the current Big 12 leader Kansas State on the road next Saturday.

18.Texas Tech: The Red Raiders played well this week, beating West Virginia and winning at Oklahoma. With another 2-0 week this week they could be in the Big 12 lead if things break right.

19.Iowa: The Hawkeyes picked up a big win at Indiana and followed that up with a dramatic comeback win over Northwestern. The Hawkeyes will play at Rutgers this week.

20.Florida State: The Seminoles had a great week as they won at Syracuse and beat Louisville. After struggling for a while, they look back to being the team they were expected to be preseason.

21.Louisville: The Cardinals picked up a big win at Virginia Tech and had Florida State beat but they then lost that game. They will play Duke at home this week, which should be interesting.

22.Wofford: The Terriers have been rolling in SoCon play, winning their first 11 games. They will play a tough game this week as they play UNC Greensboro.

23.Wisconsin: The Badgers picked up a nice win at Minnesota and played well at Michigan but they lost at Michigan. They play Michigan State on Tuesday with an opportunity to pick up a big win.

24.Maryland: The Terrapins won at Nebraska this week which was their only game, they will play Purdue at home and at Michigan this week.

25.Lipscomb: Lipscomb has been rolling as of late, they now are 20-4 and in position to steal and at-large bid.