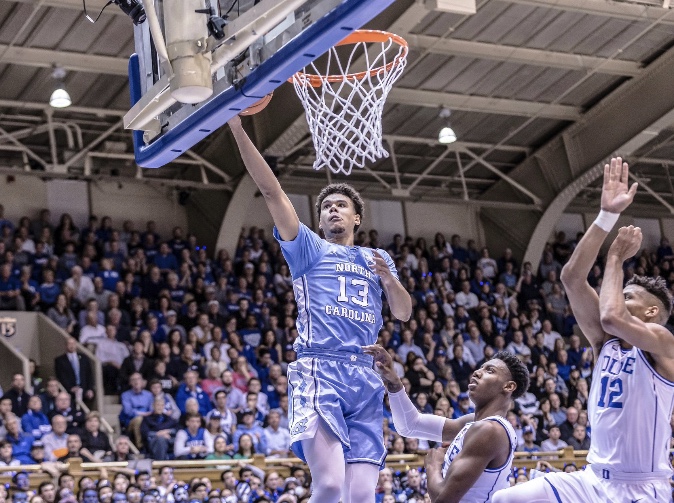 We have a new number one in my Power Rankings, thanks in part due to the fact Duke lost Zion Williamson, while losing to North Carolina. Meanwhile, the rest of the Top-25 was scrambled based on some of the other wild results that took place this week. Following all this madness, here’s my brand new Power Rankings.

1.Virginia: The Cavaliers are my new number one team after they beat Virginia Tech and Louisville on the road. With Duke and North Carolina having to play each other and Virginia having only one more road game left, the ACC regular season title will likely once again go through Charlottesville.

2.Gonzaga: The Bulldogs won two games at home by about 30 points each but at this point in the season that is what we come to expect. Zion Williamson may be running away with the National Player of the year award but I think Brandon Clarke deserves a spot as a First-Team All-American

3.Duke: The Blue Devils lost to North Carolina on Wednesday night, in a game where Zion Williamson injured his knee and only played 36 seconds. They followed that up by beating Syracuse in primetime on Saturday night. They along with Gonzaga and Virginia are who I think are the three best teams in College Basketball.

4.Kentucky: The Wildcats completed a Tiger sweep this week as they beat Missouri on the road and won at home by 27 against Auburn. The Wildcats will play at Tennessee this Saturday, in a game that could determine who wins the SEC title.

5.North Carolina: The Tar Heels picked up their biggest win of the season by beating Duke on the road, they then followed it up with a nice win over Florida State. The Tar Heels have been peaking in ACC play and it is a big reason they are in position to win another ACC regular season title.

6 State: The Spartans were without Nick Ward, playing basically six or seven guys, yet they went on the road and beat Michigan on the road 77-70. Cassius Winston continues to play like a First-Team All-American, while the Spartans have had a next man up that is working great.

7.Houston: The Cougars are now 26-1 this season after they beat South Florida on Saturday. They will get UCF at home this Saturday in a game that could come down to the wire.

8.Tennesssee: The Volunteers lost at LSU when the Tigers were without Tremont Waters. I was not ever sold on the Volunteers being the number one team in the sport and these past two games have backed up that belief.

10.Texas Tech: The Red Raiders have won five straight games and the main reason why they are striving is their hot three-point shooting. On Saturday, the Red Raiders shot 16-26 from three as they beat Kansas by 29 points.

11.Michigan: The Wolverines took care of business at Minnesota on Thursday but they then lost at home to Michigan State. The Wolverines defense was elite early on this season but with a defensive slump and inconsistent scoring, this team is struggling.

12.LSU: The Tigers lost a tough overtime game to a desperate Florida team on Wednesday but they picked up a huge 82-80 win against Tennessee on Saturday. The Tigers now control their own destiny in the race for the SEC regular season title.

13.Purdue: The Boilermakers didn’t play well but they came away with two road wins. The Boilermakers are tied for the lead in the Big Ten standings, with their toughest game remaining being a road game at Minnesota.

14.Kansas State: The Wildcats will take a one-game lead into tonight’s game at Kansas with a chance to basically end the Jayhawks streak. They right now have a one-game lead over Texas Tech atop the Big 12 standings.

15.Kansas: The Jayhawks had a full week to prepare for a game at Texas Tech and they laid an absolute egg, losing at Texas Tech by 29. The Jayhawks streak of Big 12 titles can end tonight when they play Kansas State in Allen Fieldhouse.

16.Wisconsin: The Badgers beat both Illinois and Northwestern this week. This past week Ethan Happ wasn’t great but Brad Davison helped the Badgers get two tough wins.

17.Maryland: Mark Turgeon finally beat a Top-25 team on the road, as Maryland beat Iowa on the road. They then followed that up by beating Ohio State at home. This team is peaking at the right time of the season, which is important for a deep March run.

18.Nevada: The Wolf Pack dropped a game at San Diego State this past week, which isn’t good. The Wolf Pack still have yet to play their best basketball this season and still have no Quadrant one wins. Those things will have a chance to change for the Wolf Pack in the coming weeks.

19.Wofford: The Terriers beat Furman on the road on Saturday to all but clinch an at-large bid. They have two road games left and if they win both they will go 18-0 in SoCon play.

20.Buffalo: The Bulls beat both Ohio and Kent State handily this past week. With a few games left, the Bulls are in great position to get an at-large bid.

21.Florida State: The Seminoles extended their winning streak to eight with a win at Clemson but they followed that up with a blowout loss at North Carolina. The Seminoles play their next three games at home, so they should be able to finish the season strong.

22.Villanova: The Wildcats have now lost three straight games, which is the first time they have done so since 2013. In both the Georgetown and Xavier games, the opposition shot lights out from three. The Wildcats must win Wednesday against Marquette, otherwise they will likely lose the Big East for a second straight year.

23.Iowa: The Hawkeyes became the first team to lose to Mark Turgeon at home, while being ranked with a loss on Tuesday. They didn’t play well against Indiana but Jordan Bohannon once again bailed them out with some big time shots.

24.Iowa State: The Cyclones went 0-2 this week with losses to Baylor at home and at TCU. While that was good for the Big 12 conference as a whole in their quest for eight bids, it all but assured that they won’t win the Big 12.

25.Mississippi State: The Bulldogs beat Georgia 68-67 in a controversial game where a technical foul was issued to Georgia for a thrown stuffed animal, they also beat South Carolina on Saturday. The Bulldogs are one game back of Ole Miss for the important double-bye in the SEC Tournament.