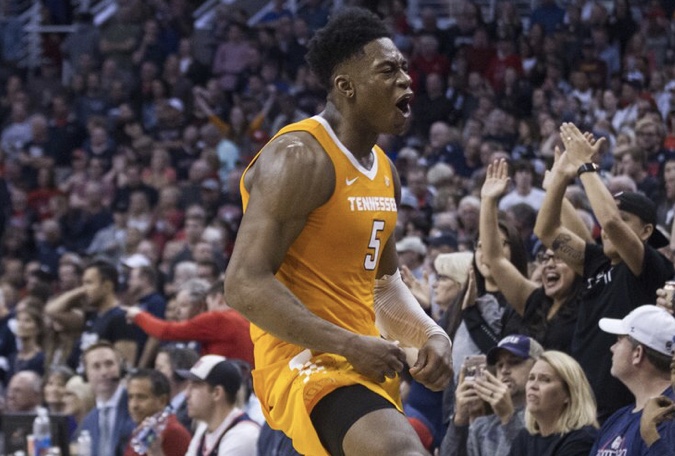 This week was thrilling as we saw multiple Top-25 teams go down, the AP number one team went down against Tennessee. With all these upsets and a new week upon us, here is my latest Power Rankings.

1.Kansas: I was fully prepared to drop Kansas out of their top spot, assuming Gonzaga beat Tennessee, however, the Bulldogs won that game, so they stay at one. The Jayhawks have been dreadful of late but they are 8-0 with wins over three of my Top-25 teams in Tennessee, Marquette and Michigan State

2.Michigan: Michigan struggled for the first time this week as they barley held off Northwestern for a road win, while they let South Carolina score 78 against them. These results are not the same results we have seen from earlier in the season when they were blowing out good teams.

3.Virginia: Virginia had a tough game against in-state rival VCU but they held them off in the end, this team should enter into conference play undefeated.

4.Tennessee: The Volunteers had the win of the week as they beat Gonzaga 76-73 in Phoenix. Admiral Schofield had the game of his life, scoring 30, including the game-winning three pointer. This team is a legitimate National title contender, who should be the favorites to win the SEC.

5.Gonzaga: The Bulldogs suffered a tough loss against Tennessee, as they fell 76-73. This loss isn’t a bad one at all and the Bulldogs still are good enough to win the National Championship.

6.Nevada: The Wolf Pack struggled to shoot against Arizona State, however, they still beat the Top-20 ranked Sun Devils 72-66, despite a bad shooting night. They will be heavy favorites in every other game they play this season and they could enter into the NCAA Tournament undefeated.

7.Duke: The Blue Devils beat Hartford and Yale this week pretty handily, they will be off this week for finals.

8.Auburn: The Tigers beat UNC Asheville and Dayton this week, they’ll play at UAB this week.

10.Michigan State: The Spartans had a good week as they beat Iowa 90-68 at home, they then went on the road and beat Florida 63-59, this warrants their reemergence into the Top-25.

11.Florida State: The Seminoles beat a Uconn 79-71 in the Never Forget Tribute Classic, they’ve started this season 8-1 without arguably their best player in Phil Cofer, which is impressive.

12.Virginia Tech: The Hokies went 2-0 this week, this week the will have a test as they will play Washington in Atlantic City.

13.Wisconsin: The Badgers suffered a tough loss at Marquette, falling 74-69, they’ll get a break this week, as they will play two buy games.

14.St. John’s: The Red Storm moved to 9-0 on the season by beating Mount St. Mary’s and Princeton this week.

15.North Carolina: The Tar Heels got back on track Wednesday by beating UNC Wilmington 97-69.

16.Arizona State: The Sun Devils gave a good fight on Friday night but ultimately they fell 72-66, they have a couple of more good games this week so they will have a good chance to pick up a couple more wins.

17.Marquette: The Golden Eagles picked up a good win this weekend by beating in-state rival Wisconsin 74-69, this team looks like they have the pieces in place to contend for a Big East title.

18.Buffalo: The Bulls went on the road and beat St. Bonaventure, they will play Southern Illinois this Saturday, before they face their toughest stretch of the season when they play on the road at Syracuse and Marquette.

19.Ohio State: The Buckeyes moved to 2-0 in conference play by beating Illinois 77-67 in Chicago

20.Villanova: Villanova continues to rule the big five, this week they beat Temple and St. Joseph’s at home, they’ll play Penn in the Palestra, before playing at Kansas next Saturday in a Final Four rematch.

21.Indiana: The Hoosiers started the week by beating Penn State on the road 64-62, they then played a good Louisville team and won 68-67

22.Houston: The Cougars have built off their momentum from last season, starting 8-0, this week they picked up a much needed road victory Oklahoma State

23.North Carolina State: The Wolfpack haven’t played the greatest non-conference schedule but they are 8-1, this week they’ll look to improve on that as they play at Penn State.

24.Missisippi State: The Bulldogs beat Clemson 82-71 in the Never Forget Tribute Classic, next up they’ll play Cincinnati at home.

25.Furman: The Paladins won two games on the road this week, they’ll get a couple of home games, before their big matchup at LSU on December 21st.