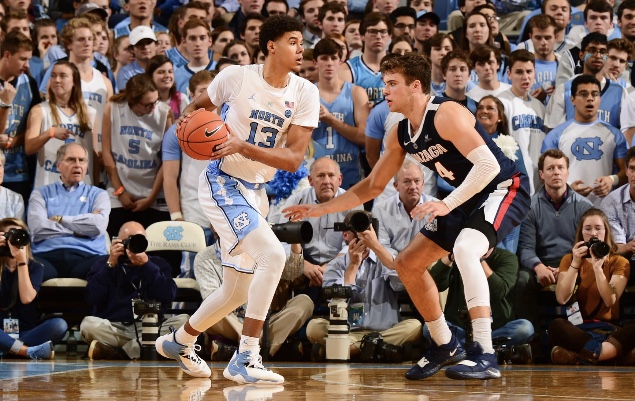 This week was finals week, so there weren’t a whole lot of great games, however, there are still some movements that made impacts on my Power Rankings.

1.Kansas: The Jayhawks got revenge years in the making as they took out their kryptonite Villanova, winning 74-71 in Allen Fieldhouse to move to 9-0. Dedric Lawson and Lagerald Vick combined for 57 points in that game, if they start to get offense from players like Quentin Grimes and Marcus Garrett this team will be dangerous.

2.Michigan: The Wolverines beat Western Michigan 70-62 this weekend, they trailed at times in the first half during that game. Overall that performance is nothing to hang their hat on but it did move them to 11-0.

3.Virginia: Virginia took the week off for finals but they will be back in action this week when they play at South Carolina.

4.Tennessee: The Volunteers went into hostile territory and beat Memphis 102-92. This teams one-two punch of Grant Williams and Admiral Schofield are hard for most teams to handle, as both can drop 20 in any game.

5.Nevada: The Wolf Pack struggled against a good South Dakota State team on Saturday, that being said they won and are now 11-0.

6.Duke: The Blue Devils took the week off for finals but they’ll be back this week to play Princeton and then Texas Tech in Madison Square Garden.

7.Gonzaga: The Bulldogs continued their tough stretch of games this weekend by losing at North Carolina 103-90. They have done well to start the season, however, for the first time all season it looked like the Bulldogs were tired which helped lead to their defeat on Saturday.

8.Auburn: The Tigers needed overtime to beat UAB on Saturday, which is less than ideal, they’ll need to play better than that this week when they play at NC State and Murray State at home.

9.Texas Tech: The Red Raiders are now 10-0, they will put that undefeated record on the line this week when they play Duke in New York City.

10.Michigan State: The Spartans took care of Green Bay on Sunday, they will play rival Oakland on Friday.

11.North Carolina: The Tar Heels picked up a great 103-90 win over Gonzaga on Saturday night, this team struggled at times this year but this win could be the one they needed to turn their season around.

12.Florida State: The Seminoles took the week off, they’ll play three home games this weekend, they will be looking to go 3-0 this week,

13.Virginia Tech: The Hokies beat Washington 73-61 in Atlantic City, they are now 9-1 on the season and they look poised to enter into ACC play with only one loss.

14.Wisconsin: The Badgers are in the midst of their easiest part of the schedule, so they should continue to roll before Big Ten play starts back up.

15.St. John’s: The Red Storm moved to 10-0 on the season, if they take care of business this week they will enter into Big East play unbeaten.

16.Arizona State: The Sun Devils struggled for much of the game at Georgia, however, they were able to come from behind to win. This week they will head on the road to play Vanderbilt, before playing a big home game against Kansas on Saturday.

17.Marquette: The Golden Eagles took the week off for finals but they will play two home games, one being against Buffalo.

18.Buffalo: The Bulls are now 10-0, this week they will play games at Syracuse and at Marquette, if they win even one of those games you have to think they’ll be in position to get an at-large bid.

19.Ohio State: The Buckeyes struggled against Bucknell on Saturday but they won, this week they will play a home game against Youngstown State, then they play UCLA in the CBS Sports Classic.

20.Indiana: The Hoosiers won on a thriller against Butler on Saturday winning on a Rob Phinisee buzzer-beating three. This Hoosiers team looks like they are here to stay in the Top-25.

21.Houston: The Cougars beat LSU and St. Louis at home this week, next up is a game against a solid Utah State team.

22.North Carolina State: The Wolfpack went on the road and beat Penn State 89-78, they’ll get a big game this week as they will play Auburn at home.

23.Mississippi State: The Bulldogs picked up a big win by beating Cincinnati 70-59, which moved them to 9-1 on the season. They will play home games against Wofford and Wright State this week.

24.Oklahoma: The Sooners have started 9-1 on the season, which includes wins now over USC, Notre Dame, Florida, Wichita State, and Dayton. None of those teams are tournament locks but to win all of them has helped them, Christian James has been great to start this season.

25.TCU: The Horned Frogs continue to roll this year. They are 8-1 with wins at SMU and USC, and their loss to Lipscomb was when they were without Jaylen Fisher, this team looks like a legit top-25 team right now.