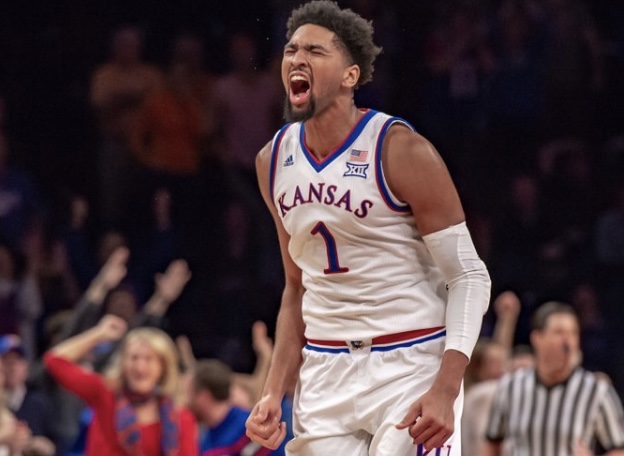 This week was Feast Week and during that, we saw some pretty awesome game results, headlined by two AP Top-5 matchups. With Gonzaga beating Duke, and Kansas beating Tennessee. Feast week was also filled with a lot of surprising results, as plenty of teams either won big games or suffered losses that surprised people. I will be trying to make sense of all of this with my latest Power Rankings.

1.Kansas: The Jayhawks take back the number one spot and for good reason, they now own two wins over Top-10 teams. The frontcourt duo of Dedric Lawson and Udoka Azubuike is the best in the sport, while Lagerald Vick is stepping into the Devonte’ Graham leadership role, and Devon Dotson has been fantastic. Many people will state that Gonzaga should be the number one team in the country, however, to me it is an obvious choice as Kansas possesses the best resume in the sport and was a pretty consensus preseason number one team.

2.Gonzaga: Gonzaga picked up the win of the season by beating Duke to win the Maui Invitational. Rui Hachimura called himself the best player in the country following their win over Duke and it was justified as he made big play after big play. Brandon Clarke provided some athleticism to help contain Duke, while Zach Norvell Jr. continues to make big shots. This Gonzaga team might have the best win in the country, however, they don’t have the best resume, which is why they are at number two in my power rankings.

3.Virginia: Virginia won the Battle 4 Atlantis, which was expected, as they entered into the event as the best team. De’Andre Hunter has not only lived up to the preseason but he has exceeded them so far for the Cavaliers. Kyle Guy and Ty Jerome are maybe the best two guard duo in the country, as both can make big shots. Kihei Clark is a legitimate starting caliper guard, while Braxton Key, Mamadi Diakite, and Jack Salt are good pieces on the wing. This team should continue to roll through non-conference play, and they will likely enter into conference play undefeated.

4.Duke: While some were talking about whether or not this Duke team could beat the Cleveland Cavaliers, this team then spent Wednesday losing to a WCC team (yes Gonzaga is in the WCC). Those talks are crazy because even though Zion Williamson, RJ Barrett, and Cam Reddish could be the three best players on the court, Tristian Thompson would tear apart Marques Bolden and any bench players for the Cavaliers would be better than the other Duke role players. As for their place in College Basketball, they will probably be a Top-5 team throughout the season and they could still win ACC titles and a National Championship, they just won’t go 40-0.

5.Nevada: This Wolf Pack team continues to roll, recently winning the Las Vegas Classic. They really haven’t played anyone, however, they are blowing teams out in dominating fashion. Caleb Martin and Jordan Caroline are playing great, while the new transfers are starting to fit in for this team. If this team can get through a somewhat tough December without a loss, they could potentially go undefeated in the regular season.

6.Michigan: Michigan took the week off this past week, they should continue to play at a high level when returning this week to play North Carolina at home.

7.Tennessee: Tennessee took their first loss of the season but it took overtime for Kansas to do it. Grant Williams has gotten much better, he now can shoot threes, he’s a great rebounder, passer, and interior scorer as well. Admiral Schofield is a legitimate second scorer for the Volunteers, while Jordan Bowden, Jordan Bone, and Lamonte Turner are still the great backcourt trio for Tennessee. This team not only should be the favorite to win the SEC at this point of the season but they could legitimately make a Final Four.

8.Virginia Tech: Virginia Tech has continued to look good this season, Ahmed Hill is a legitimate third scorer alongside Justin Robinson and Nickeil Alexander-Walker. The only notable thing to keep in mind is that they are playing a man down because the NCAA won’t clear Landers Nolley because of ACT cheating concerns that have no proof behind them.

9.Michigan State: The Spartans looked good this week when winning the Continental Tire Las Vegas Invitational. Josh Langford has made the step to become the leading man on the offensive end. Cassius Winston is still a great playmaking point guard, while other players are good around those two.

10.Kansas State: Kansas State continues to roll through an easy schedule, they will play at Marquette next month, which will give them a rare opportunity for a quadrant one win.

11.Auburn: The Tigers predictably finished third in the Maui Invitational, they beat solid Xavier and Arizona teams but they look overwhelmed playing against Duke. This team still will have a chance to win the SEC and they could make a Final Four, they just aren’t an elite team though.

12.Texas: Texas is back! The Longhorns looked great against North Carolina while winning that game. They also had a chance to win against Michigan State, however, they let that game slip away from them. Kerwin Roach is a stud, he has become a great player for the Longhorns. The Longhorns also have a good couple of young players that look poised to be solid in the future. This Texas team should be able to get a decent seed this year and Shaka Smart looks like he will be able to get off the warm seat.

13.North Carolina: The Tar Heels had a rough first 60 minutes in Las Vegas as they lost to Texas, then trailed against UCLA at the half. They then turned it on in the second half of that game, winning handily. Coby White looks like the best player on the Tar Heels, which is saying a lot considering how good Luke Maye is. Nassir Little is still not starting, which is puzzling to me. This team should be fine going forward but they took a necessary hit in the rankings.

14.Texas Tech: Chris Beard is an excellent coach and it showed this week when the Red Raiders won the CBE Hall of Fame Classic. They beat both USC and Nebraska in somewhat dominating fashion. Jarrett Culver has made the necessary leap for the Red Raiders, while the Red Raiders have a lot of other players who are tough-minded and can make plays. This Red Raiders team may not be as good as last years team but they still are a force to be reckoned with in the Big 12.

15.Wisconsin: The Badgers finished second in the Battle 4 Atlantis, as they lost to Virginia in the title game. Ethan Happ continues to be a dominating player inside, while the players around him fit nicely. This team may not be a top tier team in the sports but I wouldn’t count them out of a Big Ten title or something like that.

16.Kentucky: The Wildcats have won a few games in a row but they still aren’t playing at the level most expect them to play at. PJ Washington is probably Kentucky’s best player, while other players can make plays. This team just isn’t that good right now, which is a concern.

17.Ohio State: The Buckeyes are undefeated with road wins at Creighton and Cincinnati, both of which look even better today than they did at the time. Their schedule picks up this week, which will give us a better opportunity to evaluate how good they really are.

18.Arizona State: The Sun Devils won the MGM Resorts Main Event, which was done when they beat Mississippi State and Utah State. Luguentz Dort is right now one of the best freshmen in the sport, he’s averaging 23 points per game. This team could flame out once again but right now they look really good.

19.Florida State: The Seminoles picked up another quality win by beating LSU in the AdvoCare Invitational but they then lost to Villanova in the title game. The Seminoles have a lot of different playmakers but they don’t have a go-to guy. Without that, they could continue to struggle against good teams, although they still should overwhelm most teams.

20.Iowa: Iowa continues to be here in large part due to the fact they had an awesome week, beating Oregon and Uconn last week. They play Pittsburgh and Wisconsin this week, if they are undefeated after that, this team could be a legitimate Top-25 team.

21.Purdue: The Boilermakers didn’t play anyone good this week, so nothing to see with them. Carsen Edwards is averaging 25 points per game on the season, which is very impressive. This week they’ll have opportunities to pick up big wins playing on the road at Florida State and Michigan.

22.St. John’s: The Red Storm won the Legends Classic in large part due to the fact they have a legend in Shamorie Ponds. Ponds had 35 in the Red Storm’s win over VCU, which included a game-winning shot before the buzzer sounded. This team has major frontcourt issues but their weak schedule should allow them the ability to coast in non-conference play.

23.Villanova: The Wildcats rebounded big time this week by beating Florida State to win the AdvoCare Invitational. Phil Booth and Eric Paschall have been good, however, the key for the Wildcats seems to be the play of Collin Gillespie and Dhamir Cosby-Roundtree, who stepped up big for them in their win over Florida State.

24.Buffalo: The Bulls are continuing to roll through non-conference play, in a couple of weeks they will have opportunities to beat Marquette and Syracuse on the road, which could move them into realistic at-large bid range.

25.NC State: The Wolfpack haven’t played anyone good yet, so being undefeated isn’t shocking. We’ll have a better understanding of this team after they play Wisconsin.