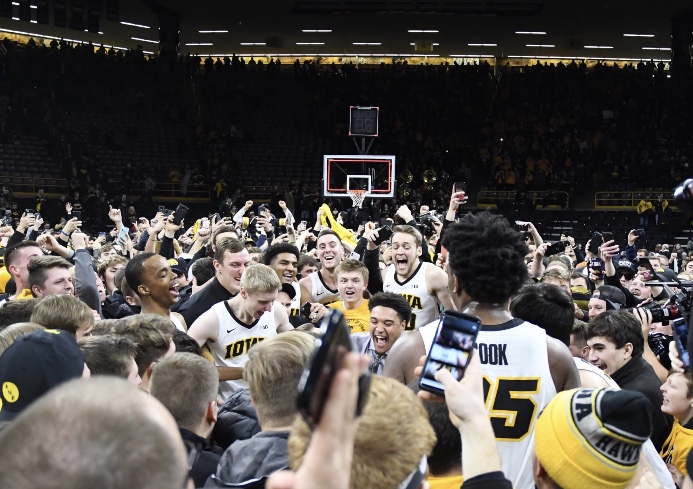 This past week saw lots of chaos, as both Michigan and Michigan State lost games, Kansas continued to lose and other teams throughout the Top-25 lost. Also last week different teams picked up big wins or continued to win, which helped them move up the rankings. With all these results, changes needed to be made, so here are my brand new Power Rankings.

1.Duke: The Blue Devils beat up on an injured Notre Dame team on the road, plus they beat St. John’s by 30 at home. They will play Boston College on Tuesday, before playing a big road game at Virginia where they can take a lead on the Cavaliers in the ACC standings.

2.Virginia: The Cavaliers played probably their worst game of the season against NC State and they didn’t play well against Miami without Ty Jerome. They must play better if they want to remain atop the ACC standings as they play Duke in primetime on Saturday.

3.Tennessee: The Volunteers continue to win games as expected, they’ll have three straight home games before they play at Kentucky on December 16th.

4.Gonzaga: The Bulldogs won at BYU by 30 and beat San Diego by only 16, they’ll play both San Fransisco and St. Mary’s, who are the two best teams not named Gonzaga in the WCC.

5.Michigan: The Wolverines haven’t been playing well as of late and losing at Iowa magnified those struggles. The Wolverines should start to get on a roll as their schedule eases up in the coming weeks.

6.Kentucky: The Wildcats beat Vanderbilt won by 25 on the road, they trailed by double-digits late at Florida before storming back to beat the Gators 65-54. The Wildcats schedule gets tougher in the coming weeks as they will play Mississippi State, LSU, and Tennessee this week.

7.Marquette: The Golden Eagles beat Butler on the road by 18 on Wednesday behind 32 points from Markus Howard. This team going forward looks like it should be not only one of the favorites to win the Big East but also a reasonable Final Four contender.

8.Villanova: The Wildcats didn’t play their best this week but they come away 2-0 with two 12 point wins over DePaul and Georgetown. This week will be their big showdown as they play at Marquette on Saturday.

9.North Carolina: The Tar Heels last loss came at home against Louisville by 21, Saturday they got revenge from that loss as they beat the Cardinals by 10 in the KFC Yum Center. The Tar Heels now being a three game home stretch that ends with a game against Virginia.

10.Michigan State: After starting 9-0 and being without Josh Langford at Purdue was acceptable, however, losing at home to Indiana is not acceptable. This team won’t have Langford the rest of this season and while at points last week this team was talked about as a National title contender, I think those conversations maybe need to slow down.

11.Kansas: The Jayhawks lost at Texas by 10 on Tuesday to move into third place in the Big 12, found out Silvio De Sousa was ineligible for two years, lost Marcus Garrett to a high-ankle sprain, yet they then overcame all that adversity by beating Texas Tech by 16 on Saturday. No one knows what you are going to get out of this team on a nightly basis but if they play like they did on Saturday, they still can not only win the Big 12 but they have the talent to get to a Final Four.

12.Purdue: The Boilermakers maybe played their worst basketball in a month this week as they needed overtime to beat Penn State and struggled against Minnesota. That being said 2-0 is 2-0, so good job Boilermakers.

13.Nevada: The Wolf Pack won at UNLV by 17 and beat Boise State at home by 20, that is pretty much what you are supposed to do if you are Nevada playing against the easy Mountain West Conference.

14.Iowa State: The Cyclones beat West Virginia pretty handily, before struggling to beat Texas at home. That being said they did go 2-0 on the week and they remain just a game back in the Big 12 standings.

15.Houston: The Cougars got back at Temple after they handed them their first loss of the season a few weeks ago. They will play at UCF and Cincinnati at home this week, so we should get a better idea of just how good this team is.

17.LSU: LSU had been rolling but they fell back down to earth on Saturday as they lost to Arkansas 90-89. The schedule doesn’t get any easier as they play at Mississippi State, Auburn and at Kentucky in their next three games.

18.Texas Tech: The Red Raiders beat TCU by 19 in their first Big Monday game in over a decade but when push came to shove, they were no match for Kansas on Saturday.

19.Wisconsin: The Badgers beat Nebraska and Maryland this week which is what you are supposed to do if you are Wisconsin. They Badgers will play two road games at Minnesota and at Michigan this week, so they could drop a game or two this week.

20.Kansas State: The Wildcats only played one game this week and they beat Oklahoma State on the road 75-57. The Wildcats will now play their biggest regular-season game in decades on Tuesday, as they play Kansas with a chance to take a two-game lead on the Jayhawks in the race for the Big 12 title.

21.Baylor: The Bears have now won six straight games and they are in a share of the lead in the Big 12. This team looks like they are heading to the NCAA Tournament but if the can win their next two they look like they could also win the Big 12.

22.Louisville: The Cardinals are what they are I think and while they have played well this season, I don’t think they are a legitimate ACC challenger or Final Four contender but they are a good team. This was shown Saturday as they lost at home by 10 to North Carolina.

23.Washington: Yes an actual PAC-12 team is in here and it is Washington. The Huskies are now 9-0 in PAC-12 play and while they rest of the league isn’t good Washington looks like they not only are a tournament team but a potential second weekend team as well.

24.Iowa: The Hawkeyes picked up a signature win this week as they beat Michigan by 15 at home. This win not only is big for their tournament chances but it shows that this team can compete with the top-tier teams in the sport.

25.Florida State: The Seminoles have now won three straight games, they are beating up against some of the bottom tier teams in the league in doing so. They will play two decent teams in Syracuse and Louisville this week and with this team, who knows what the results are going to be in this game.